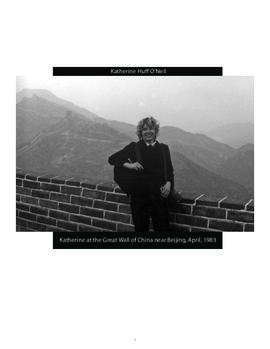 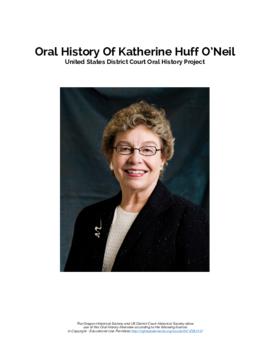 Katherine Huff O'Neil was born in New Orleans, Louisiana, in 1938. She attended Stanford University, and spent her junior year abroad at the University of Geneva in Switzerland. She graduated with a bachelor's degree in political science in 1960. She worked for the Young Republican Division of the Republican Party in Washington, D.C., until she was accepted to the Harvard University Law School. At Harvard, she met Mike O'Neil, and they married in 1961; they later had two children. After one year at Harvard, O'Neil dropped out and began raising a family. In 1964, the young family moved to Tigard, Oregon, and Mike O'Neil practiced law in Portland. Katherine Huff O'Neil worked as a correspondent for the Community Press and the Oregonian newspaper. She returned to school in 1974, studying law at Northwestern School of Law at Lewis and Clark College and graduating in 1977. In 1975, she and Mike O'Neil divorced. She practiced law in Portland, Oregon, and in 1982, she met John Paul Toby Graff when they both worked at the Schwabe law firm. Together, they formed the law firm Graff & O'Neil in 1986. O'Neil was a founding member of Oregon Women Lawyers. She served as a pro-tem judge on the Multnomah County Circuit Court, argued cases in state and federal courts as a trial and appellate lawyer, and held a seat on the American Bar Association House of Delegates. She was also chair of the Oregon lawyer representatives to the Judicial Conference of the Ninth Circuit Court of Appeals.

This oral history interview with Katherine Huff O'Neil was conducted by Patricia Wlodarczyk from November 3, 2000, to May 9, 2001. At O'Neil's request, sections of sessions 2 and 3 of the interview were redacted by the U.S. District Court of Oregon Historical Society and the Oregon Historical Society. In addition to the audio recording and transcript of the interview, the collection includes a digital photograph album in PDF format containing images of O'Neil's family, friends, and colleagues. All but two of the digital photographs used to create the album are also included in the collection as individual images.

In this interview, O'Neil discusses her family background and early life in New Orleans, Louisiana, including her early education, family vacations, and race relations in the South. She talks about studying political science at Stanford University, including her social life and her year studying abroad at the University of Geneva in Switzerland. She then briefly discusses her involvement with the Republican Party and working for the Young Republicans in Washington, D.C. She talks about studying law at Harvard University, including her experience as a female student, as well as meeting Mike O'Neil and their subsequent marriage. She talks about raising a family; relocating to Tigard, Oregon, in 1964; and working as a correspondent for the Community Press and the Oregonian newspaper. She discusses studying law at Northwestern School of Law at Lewis and Clark College, including her fellow law students.

O'Neil discusses practicing law in Portland. She talks about her first job with a law firm and sexist attitudes she faced as a woman lawyer, as well as racist attitudes she observed in her fellow lawyers. She talks about her fellow lawyers, judges she argued before, and some of the cases she worked on, particularly regarding admiralty law. She describes each of the law firms she worked for during her career. She also talks about trips to China in 1983 and 1985; her involvement in the formation of Oregon Women Lawyers; and serving as a pro-tem judge on the Multnomah County Circuit Court. She discusses her plans for retirement; her children and their careers and their families; and serving on the American Bar Association House of Delegates. She also speaks about her involvement with the Oregon Bar Association. She talks about changes in the law profession and her role in the investigation of U.S. Senator Bob Packwood. O'Neil closes the interview by discussing people who influenced her to pursue a career as a lawyer.