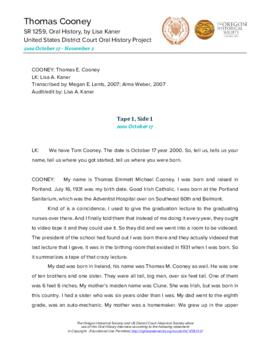 Thomas Emmett Michael Cooney was born in Portland, Oregon, in 1931. He attended the University of Portland, but left when his Air Force Reserve unit was activated to serve in the Korean War. He graduated in 1953 after his discharge. He then attended Willamette University, earning his law degree in 1956. In 1955, he and Beverly McKnight were married; they later had four children. He started practicing law in Portland with MacGuire, Shields, Morrison, and Bailey. Eventually, he was a partner at Cooney & Crew LLP, where he frequently represented the Oregon Medical Association. He and Beverly McKnight divorced in 1984, and in 1985, Cooney and Janice Fenton were married. He died in 2015.

This oral history interview with Thomas Cooney was conducted by Lisa A. Kaner from October 17 to November 2, 2000. In this interview, Cooney discusses his family background and early life in Portland, Oregon, including his interest in drama and golf, and his memories of World War II. He then discusses attending the University of Portland, including being a cheerleader. He also briefly discusses his service in the Air Force during the Korean War. He relates several unfortunate incidents involving a pogo stick. He describes studying law at Willamette University, including his social life. He then talks about raising a family and coaching his son's basketball team. He describes getting started in law practice in Portland, Oregon, at MacGuire, Shields, Morrison, and Bailey, including several of the cases he tried. He then speaks at length about representing the Oregon Medical Association while a partner at Cooney & Crew and several of the malpractice suits he tried. He also relates several anecdotes about his life and being a lawyer.