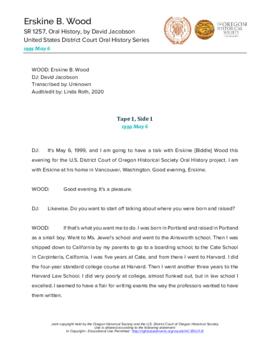 Erskine Biddle Wood was born in 1911. He was the son of Erskine Wood and the grandson of Charles Erskine Scott Wood. He attended Harvard College and Harvard Law School, earning his law degree in 1936. Wood became a lawyer who specialized in maritime law at Wood, Tatum, Sanders & Murphy in Portland, Oregon. During World War II, he served as an administrator in the Navy.

This oral history interview with Erskine B. Wood was conducted by David Jacobson at Wood's home in Vancouver, Washington, on May 6, 1999. In this interview, Wood briefly discusses his family background and early life in Portland, Oregon, including fishing on the Columbia River, as well as his education at a boarding school in California. He then discusses his experiences at Harvard College and at Harvard Law School. He talks about his interest in admiralty law, as well as the admiralty law career of his grandfather, C.E.S. Wood. He then discusses how World War II affected his law practice, as well as some of the cases he worked on, and some of the judges he argued before. He talks about his children and his service in the Navy during World War II. He closes the interview by discussing the changes in Oregon and his hopes for the state's future.