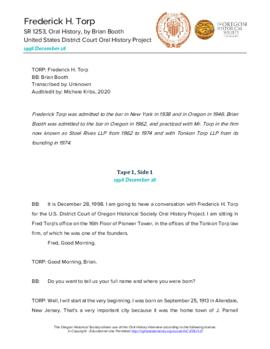 Frederick H. Torp was born in Allendale, New Jersey, in 1913. He attended Columbia College in New York City for both his undergraduate work and law school, earning his law degree in 1937. He was admitted to the New York bar in 1938 and was an attorney in private practice. Just before he joined the Navy in 1942, he and Elsie Arneson were married; they later had three children. He served in the Pacific Theater during World War II. After his discharge in 1945, he relocated to Oregon and joined the law firm of Hart Spencer, now known as Stoel Rives. He worked there until 1974, when he founded Tonkon Torp LLP. Elsie Arneson died in 1972, and in 1978, he and Nancy Morse Moller were married. He died in 2003.

This oral history interview with Frederick H. Torp was conducted by Brian Booth in the offices of Tonkon Torp LLC in Portland, Oregon, on December 28, 1998. In this interview, Torp discusses his family background and early life in New Jersey. He talks about attending Columbia College in New York City, including his family's financial difficulties during the Depression. He briefly discusses practicing law in New York before the advent of World War II. Torp then discusses his service in the Navy from 1942 to 1945, including acting as a lawyer in courts martial, and fighting in the Pacific Theater. He talks about joining the law firm of Hart Spencer, now known as Stoel Rives, in Portland, Oregon, in 1945, including the lawyers he worked with and his clients. He also talks about the 1954 termination of federal recognition of the Klamath Tribes and his involvement in some of the legal aspects of the termination. He discusses starting the law firm Tonkon Torp in 1974, including the lawyers he worked with. He talks about his children, their families, and their careers; his involvement with the Episcopal Church and other organizations; and his colleagues at the Hart Spencer firm. He closes the interview by talking about some of the judges on the U.S. District Court of Oregon, including Gus Solomon and James Alger Fee.

Incomplete transcript (31 pages) is available for in-person use at the Oregon Historical Society Research Library.