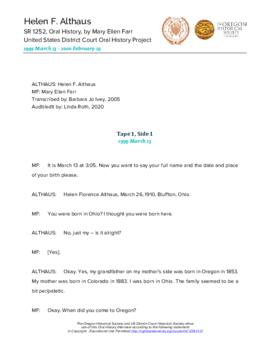 Helen Florence Althaus was born in Ohio in 1910. The next year, her family came to Oregon, and she grew up on a farm in Troutdale. She studied chemistry at the University of Oregon, graduating in 1932, and worked as a chemist for an aluminum company near Troutdale. She earned her law degree from Northwestern College of Law in 1945, and was admitted to the Oregon State Bar later that same year. She was the first woman to clerk for a federal judge in Oregon, clerking for U.S. District Court Judge James Alger Fee from 1947 to 1949. From 1949 to 1953, she served as the deputy city attorney for Portland, Oregon. She practiced law at the firm King Miller, now known as Miller Nash, from 1953 until 1970, when she left to form an all-woman law firm. Then, in 1973, she handled special assignments regarding the National Environmental Policy Act for the Bonneville Power Administration. Meanwhile, she also served as the only woman member of the Troutdale City Council from 1973 to 1982. In 1980, she served as staff attorney in the office of the Regional Solicitor, U.S. Department of the Interior, where she headed a research project of the U.S. Fish & Wildlife Service. She was a founding member of both the Queen's Bench and Rogue Women Lawyers. After her retirement, she pursued an acting career, joining the New Playwright's Theatre company in Ashland, Oregon. She also served on its board. Althaus received the Justice Betty Roberts Award in 1994, and the American Civil Liberties Union of Oregon award for significant contributions to the cause of individual freedom in 1997. She died in 2006.

This oral history interview with Helen F. Althaus was conducted by Mary Ellen Page Farr in Ashland, Oregon, from March 13, 1999, to February 19, 2000. In this interview, Althaus discusses her family background, particularly her family's history of civil rights activism, and her early life on a farm in Troutdale, Oregon, including her education, her interest in science, and her social life. She discusses her experiences as law clerk for Judge James Alger Fee, from 1947 to 1949. She talks about practicing law in Portland, Oregon, with the law firm King Miller, now known as Miller Nash, from 1953 to 1970, including some of the cases she argued and other women lawyers she worked with. She closes the interview by briefly discussing her work as deputy city attorney for Portland from 1949 to 1953.

Incomplete transcript (183 pages) is available for in-person use at the Oregon Historical Society Research Library.