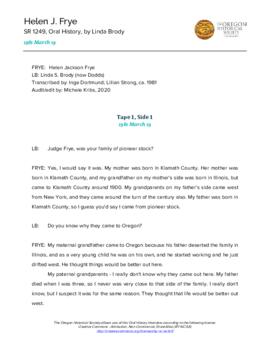 Helen Jackson Frye was born in Klamath County, Oregon, in 1930 and grew up in Klamath Falls. Her father died when she was 3. Shortly afterward, her mother and brother caught tuberculosis and were hospitalized, so she was raised by her grandparents. Frye was reunited with the mother and brother when she was in the fourth grade, and it was a difficult experience that influenced her later rulings in juvenile court. She attended the University of Oregon, and while in college, she met William Frye. They married in 1952, and in 1953, she earned a degree in English. She then began working on her master's degree, but left school after she became pregnant. She and William Frye continued to live in Eugene. They had three children, and she taught in public schools. In 1960, she finished her master's degree. She decided to go to law school in 1963, and graduated from the University of Oregon law school in 1966. She practiced law in Eugene, eventually joining her husband's law firm. She was appointed by Governor Tom McCall to Lane County Circuit Court in 1971. She and William Frye divorced in 1975, and she and Peter Holloman were married in 1980. She was appointed to the U.S. District Court of Oregon by President Jimmy Carter in 1978, becoming Oregon's first woman federal judge. She took senior status in 1995. Some of her most notable cases relate to Rajneeshpuram, spotted owls, and workplace discrimination against women. She died in 2011.

This oral history interview with Helen J. Frye was conducted by Linda Dodds in Frye's chambers in Portland, Oregon, on March 19, 1981. In this interview, Frye discusses her family background and early life on a farm in Klamath County, Oregon. She talks about the difficult experience of a huge change in her family situation as a child, when she was reunited with her mother and brother after having been raised entirely by her grandparents. She then discusses attending the University of Oregon, including influential professors, and meeting and marrying William Frye. She talks about raising a family and how postpartum depression drove her to start her teaching career. She also discusses her involvement in politics, including William Frye's political campaigns. She then talks about attending the University of Oregon law school in 1963, including other women in her class, balancing family life, and starting to practice law.

She describes becoming a judge for the Lane County Circuit Court, including her appointment by Governor Tom McCall and her later campaign. She talks about how her gender affected the way defendants perceived her. She also discusses how this new position affected her marriage and her divorce in 1975. She talks briefly about serving as a judge for the U.S. District Court of Oregon. She closes the interview by discussing her current family life in 1981 and her plans for the future.

Copyright held by the Oregon Historical Society. Use is allowed according to the following license: Creative Commons, BY-NC-SA: http://creativecommons.org/licenses/by-nc-sa/4.0/

Incomplete transcript (34 pages) is available for in-person use at the Oregon Historical Society Research Library.