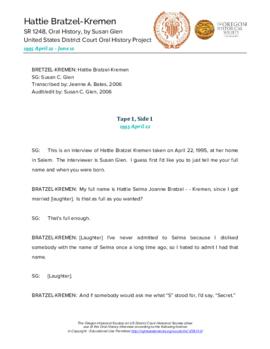 Hattie Selma Joanne Bratzel Kremen was born in North Dakota in 1908. The next year, her family moved to Gresham, Oregon, then to Mulino, Oregon, about six years later. They briefly lived in Silverton, Oregon, and finally settled in Salem, Oregon, in around 1919. She worked as a court reporter in Polk and Marion counties after high school, until 1945, when she enrolled at Northwestern College of Law in Portland, Oregon. She took a break to serve as a court reporter at the Nuremberg Trials in Germany in 1947. When she returned, she continued her law studies at Willamette University, then finished her law degree at Northwestern College of Law in 1951. That same year, she ran for the office of district attorney of Marion County. She lost that race, instead going into private law practice in Eugene. In 1956, she ran again and won, becoming Oregon's first woman district attorney. In 1959, she and Leonard L. Kremen were married. After she left office in 1964, she returned to private law practice in Salem. She died in 1996.

This oral history interview with Hattie Bratzel Kremen was conducted by Susan C. Glen from April 22 to June 10, 1995. In this interview, Bratzel Kremen discusses her family background and early life in Mulino, Gresham, Silverton and Salem, Oregon, including facing anti-German sentiment during World War I, working on the family orchard, and her education. She discusses the limited career opportunities open to women, her decision to pursue work as a secretary in law offices, and working as a court reporter. She then talks about attending Northwestern College of Law (which later became a part of Lewis & Clark College) at age 37, including her professors, her women classmates, and working full time as a court reporter while studying. She also describes serving as a court reporter for Judge James T. Brown at the Nuremberg Trials in 1947, as well as her travels around post-war Europe. She talks about her first race for the office of Marion County district attorney in 1951. She discusses practicing law in Salem, including representing mothers in custody cases. She then discusses her service as Marion County district attorney from 1956 to 1964, including cases she prosecuted and the long hours she kept. She briefly talks about her marriage to Leonard Kremen, as well as his family background and early life. She then discusses her return to private practice in 1964 and focusing largely on probate law. She closes the interview by talking about her travels.

Copyright for this interview is held by the estate of Hattie Bratzel Kremen. In Copyright: http://rightsstatements.org/vocab/InC/1.0/