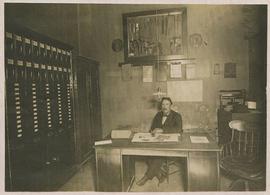 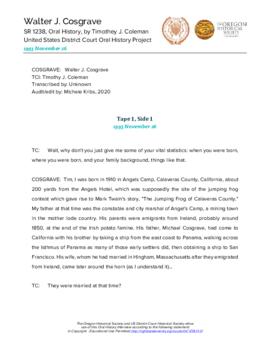 Walter John Cosgrave was born in Angels Camp, California, in 1910. He grew up in Calaveras County, where his father was sheriff, and his family moved to the San Francisco Bay Area in 1922. He graduated from the University of California San Francisco in 1932. In 1935, he and Virginia B. Moriarty were married; they later had two children. He worked for an oil company, which transferred him to Oregon in 1940. He studied law in Oregon. He was an attorney with Maguire, Shields, Morrison, Bailey & Kester in Portland from 1958 to 1980. He was a partner with Cosgrave, Vergeer & Kester. He died in 1999.

This oral history interview with Walter J. Cosgrave was conducted by Timothy J. Coleman on November 26, 1993. In this interview, Cosgrave discusses his family background and early life in Calaveras County, California, including his education, childhood games, and the experience of being the son of the county sheriff. He the talks about moving to the San Francisco Bay Area and attending high school. He briefly discusses coming to Oregon and getting interested in the law.

Joint copyright is held by the Oregon Historical Society, the U.S. District Court of Oregon, and the estate of Walter J. Cosgrave. Use is allowed according to the following statement: In Copyright – Educational Use Permitted, http://rightsstatements.org/vocab/InC-EDU/1.0/

Incomplete transcript (16 pages) is available for in-person use at the Oregon Historical Society Research Library.