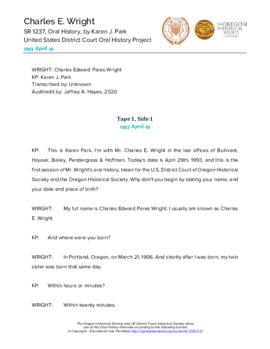 Charles Edward Pares Wright was born in Portland, Oregon, in 1906. He graduated from Yale Law School in 1932 and passed the Oregon State Bar in 1933. He was a lawyer in Portland and worked in the regional office of the Federal Securities and Exchange Commission in Seattle, Washington, from 1937 to 1943. He later served on the board of the Portland Junior Symphony, was vice president of Catlin Hillside Schools, and was director of the Travelers Aid Society, the Portland Art Association and the Portland City Club. He died in 1999.

This oral history interview with Charles E. Wright was conducted by Karen J. Park in the offices of Bullivant, Houser, and Bailey in Portland, Oregon, from April 29 to July 1, 1993. In this interview, Wright discusses his family background and early life in Portland, including his education, memories of World War I, social life, and working at First National Bank. He then discusses attending Yale, including his part-time jobs, his favorite subjects, and social life during Prohibition. He goes on to talk about attending Yale Law School. He describes some of his professors, including William O. Douglas, as well as some of his classmates. He talks about returning to Portland in 1933 and practicing law at Platt, Platt, Fales, Smith & Black, then later with the Bullivant firm in 1943. He describes the lawyers he worked with at the firms. He also talks about his marriage to Elisabeth Knowlton Strong and starting a family. He discusses working for the Securities and Exchange Commission in Seattle, Washington, from 1937 to 1943, including his frustration at the lenient sentences handed down for white-collar crimes. He also reflects on going to high school with Gus Solomon and on Solomon's later judicial career; passing the Oregon bar; and his involvement with the Portland Art Association. He speaks at length about practicing law at the Bullivant firm in Portland, including his clients, the firm's growth, and his interest in probate law. He also briefly talks about his feelings about the greater number of women practicing law since the women's movement of the 1960s and 1970s. He closes the interview by talking about his children and grandchildren, and his plans for the future.