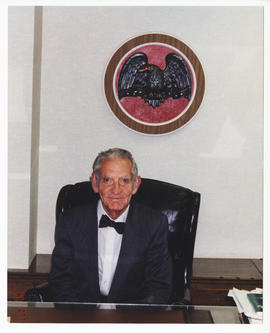 James Milton Burns was born in Portland, Oregon, in 1924. His father worked as a logger, and Burns grew up in lumber camps. His mother died in 1930, and his father remarried to his mother's sister. After his father died in 1935, Burns was raised by his aunt and other family members. He earned a scholarship to the University of Portland, but in 1943, he left to join the Army before graduating. He served in France during World War II. After the war, he returned to the University of Portland in 1945 and graduated in 1947. He then attended the Loyola Chicago University of Law, where he earned his law degree in 1950. That same year, he and Helen Hogan were married. The new family returned to Portland, where Burns was an attorney in private practice from 1950 to 1952. He then served as district attorney for Harney County, Oregon, from 1953 to 1955. He returned to private practice in Portland from 1956 to 1966 before being appointed to the Multnomah County Circuit Court in 1966. He served on that bench until 1972, when he was nominated by President Richard Nixon to the U.S. District Court of Oregon. He served as chief judge from 1979 to 1984, and took senior status in 1989, after which he lived in Wilsonville, Oregon, until his death in 2001.

This oral history interview with James M. Burns was conducted by Clark Hansen at the U.S. District Courthouse in Portland, Oregon, in sessions from January 17, 1990, to August 25, 1998. Sandy Dixon and a person identified as Dan G. were also present for sessions in 1998. The audio is incomplete; Tape 8 is missing as of 2001.

In the interview, Burns discusses his family background and early life in Portland, including growing up in lumber camps, his mother's death in 1930 and his father's death in 1935, and being raised by his aunts. He also discusses his early education at Grant High School and the University of Portland. He then talks about leaving the university to join the Army in 1943 and his service in France during World War II. He discusses returning to Portland and finishing his undergraduate studies at the University of Portland, attending law school at Loyola Chicago University, and earning a law degree. He also briefly discusses cases that came up later in his career that law school did not prepare him for, including civil rights and malpractice lawsuits. Burns talks about meeting his wife, Helen Hogan, and starting a family while practicing law in Portland from 1950 to 1952; about serving as district attorney in Harney County from 1953 to 1955; and about practicing law again in Portland from 1956 to 1966. He also discusses his involvement in the Republican Party during this time period, as well as the Trumpeters; small-town life in Harney County; and the vice exposé published by the Oregonian newspaper and the political figures involved in the ensuing scandal.

Burns discusses serving on the Multnomah County Circuit Court from 1966 to 1972, and on the U.S. District Court of Oregon from 1972 until he took senior status in 1989. He talks about the history of the District Court and cases that came before him, including on topics such as environmental protection, particularly logging in national forests; Native American fishing rights; wiretapping; capital punishment; and conditions in prisons. He also talks about his colleagues on the courts: Owen Panner, James Redden, Otto Skopil, Helen Frye, Robert Belloni, Mike Hogan, Diarmuid O'Scannlain, and Ed Leavy. Burns discusses his duties as chief judge from 1979 to 1984; sentencing guidelines; plea bargains; law clerks; landmark Supreme Court cases; and the procedures of the District Court. He also describes his activities since taking senior status; his wife's career in medicine; and teaching at the judicial college in Reno, Nevada.

Incomplete transcript (484 pages) and handwritten index (20 pages) are available for in-person use in the Oregon Historical Society Research Library.