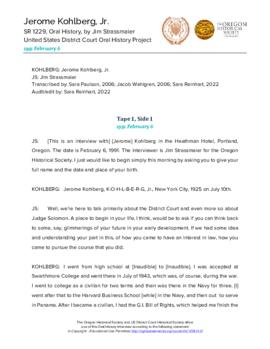 Jerome Kohlberg, Jr. was born in New York in 1925. He attended Swarthmore College in Swarthmore, Pennsylvania, then was called to serve in the U.S. Navy during World War II. After his discharge, he attended Harvard Business School, where he earned an MBA. He also earned a law degree from Columbia University. He came to Oregon after graduating from law school and clerked for Judge Gus Solomon of the U.S. District Court of Oregon. He and Nancy Seiffer were married in 1949; they later had four children. He joined Bear Stearns in 1955 and founded the Kohlberg, Kravis, Roberts investment firm (also known as KKR & Co.) in 1976. He died in 2015.

This oral history interview with Jerome Kohlberg, Jr. was conducted by Jim Strassmaier at the Heathman Hotel in Portland, Oregon, on February 6, 1991. In this interview, Kohlberg discusses working as a law clerk for Judge Gus Solomon at the U.S. District Court of Oregon.

Incomplete transcript (8 pages) is available for in-person use at the Oregon Historical Society Research Library.