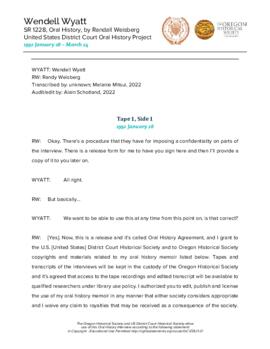 Wendell William Wyatt was born in Eugene, Oregon, in 1917. He and his family moved to Portland in the late 1920s. He studied journalism in the University of Oregon. In 1937, he had to take a year off for financial reasons. When he returned, he instead studied law, earning his law degree in 1941. After passing the Oregon Bar in 1941, he was a special agent for the FBI until 1942, when he enlisted in the Navy's aviation program. He served as a bombardier in the Marine Corps in the Pacific Theater during World War II. He and Anne Elizabeth Buchanan were married in the mid-1940s. They had three children and later divorced. After Wyatt's discharge in 1946, he returned to Oregon and practiced law in Astoria, where he began to get involved in Republican politics. He and Faye Hill were married in 1962. He represented Oregon in the U.S. House of Representatives from 1964 to 1975. After retiring from politics, he returned to Oregon to practice law in Portland with Schwabe, Williamson & Wyatt. He died in 2009.

This oral history interview with Wendell Wyatt was conducted by Randall Weisberg at Wyatt's office in Portland, Oregon, from January 28 to March 24, 1992, as part of the United States District Court Oral History Project. The interview was conducted in three sessions. A transcript is available.

In the first interview session, conducted on January 28, 1992, Wyatt discusses his family background and early life in Eugene and Portland, including his childhood hobbies, his memories of the Depression, and his interest in journalism. He then discusses studying journalism at the University of Oregon, including writing for the student newspaper, the Oregon Daily Emerald. He then discusses attending the University of Oregon Law School, including some of his professors, particularly Orlando Hollis; his social life; and the various jobs he held throughout. He talks about his early interest in politics and getting a job with the FBI, including his training and the kinds of investigations he participated in.

In the second interview session, conducted in the winter of 1992, Wyatt discusses his service as a bombardier in the U.S. Marine Corps in the Pacific Theater during World War II. He talks about practicing law in Astoria after his discharge, including getting involved in Republican politics. He talks about some of the cases he worked on, including some regarding commercial fishing. He speaks at length about his involvement in the 1952 presidential election and his relationship with U.S. Senator Wayne Morse. Wyatt discusses his time in the U.S. House of Representatives from 1964 to 1975. He talks about his appointment to take over A. Walter Norblad's seat, as well as his later re-election campaigns. He discusses the Lyndon Johnson administration, including the legislation of the Great Society Era and the Vietnam War. He then discusses the Richard Nixon administration, including Nixon's resignation and some of the accomplishments of the administration.

In the third and final interview session, conducted on March 24, 1992, Wyatt continues to discuss his time in the U.S. House of Representatives. He then describes legislation that he wishes were possible, including gun control. He reflects on what he accomplished on behalf of Oregon during his time in the House and his reasons for not running for re-election in 1975. He goes on to discuss returning to Oregon to practice law. He also talks about his involvement with the U.S. District Court of Oregon, and he briefly discusses many of the judges appointed to the various courts in Oregon. He closes the interview by discussing his opinions on recent environmental debates.

A handwritten index (4 pages) is available for in-person use at the Oregon Historical Society Research Library.