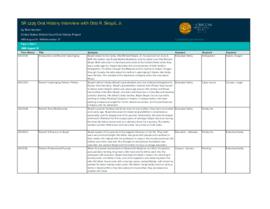 Otto Richard Skopil was born in Portland, Oregon, in 1919. He met June Johnson while at Salem High School. They were married for 15 years, from 1940 to 1955. Skopil attended Willamette University, where he earned his bachelor of arts in economics in 1941. He enlisted in the Navy and served as a lieutenant during World War II. Afterward, he returned to Willamette and earned his bachelor of laws in 1946. Following his graduation from Willamette, he worked as a private-practice lawyer from 1946 to 1972. During his time as a trial lawyer, he hired Jan Lundy as a secretary, and they married in 1957. In 1972, he was appointed to the U.S. Circuit Court of Oregon in Portland by President Richard Nixon. Skopil served as chief judge of the Circuit Court from 1976 to 1979. He was then appointed to the U.S. Court of Appeals for the Ninth Circuit by President Jimmy Carter, serving from 1979 to 1986, when he took senior status. He died in 2012.

This oral history interview with Otto Skopil was conducted by Rick Harmon and Jim Strassmaier in Skopil's chambers at the Pioneer Courthouse in Portland, Oregon, from August 19, 1985, to November 27, 1989. The audio for this interview is incomplete; Tape 26 was discovered to be blank in 2020, but its contents are reflected in an incomplete transcript and in an index.

In the interview, Skopil discusses his family background and early life in Salem, Oregon, including his time at Salem High School and the effect of the Depression and the New Deal on the Salem area. Skopil talks about attending Willamette University in great detail. He discusses his World War II experience in the Navy from 1942 to 1945, between earning his bachelor's degree in economics and returning to Willamette earn his bachelor of laws. Skopil describes practicing law in Salem for 26 years, from 1946 to 1972, including partnering with his uncle, Ralph Skopil, and later with Bruce Williams. He discusses some of the cases he argued, particularly his only U.S. Supreme Court case, which involved State Farm Insurance. He then briefly discusses his personal life, including his two marriages, first to June Johnson, then to Jan Lundy, and his involvement in various religious and civic organizations, including the Board of Governors for the Oregon Bar. He also discusses his involvement with the Republican Party and his opposition to both the Korean and Vietnam wars, as well as how the draft affected his son, Ric Skopil. He talks about serving as a judge for the U.S. Circuit Court of Oregon, including his confirmation; the procedures of the court; sentencing; and the development of the magistrate system. He also discusses some of the cases he presided over on topics including the environment, white-collar crime, and securities. He talks at length about the case of Chuck Armsbury. He also discusses working with his fellow judges, particularly Gus Solomon and Robert Belloni, as well as his relationships with Mark Hatfield and Griffin Bell. Skopil then describes his time as a judge for the Ninth Circuit Court of Appeals, including the relationship between that court and Congress; the increase of litigation during the 1980s; and the public perception of the court. He discusses some of the cases that came before the court on topics including mental health, capital punishment, timber, and drugs. He also talks about some of his fellow judges, particularly Ted Goodwin and James Browning. Skopil closes the interview by describing the importance of law clerks; discussing sentencing guidelines; and talking about his family life.

Incomplete transcript (314 pages) is available for in-person use in the Oregon Historical Society Research Library.