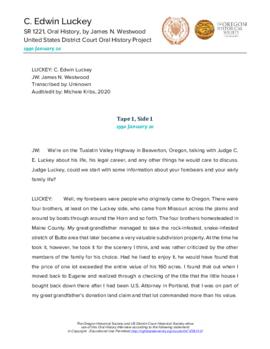 Clarence Edwin Luckey was born in Eugene, Oregon, in 1919. He graduated from the University of Oregon in 1940 and the University of Oregon Law School in 1942. From 1942 to 1946, he served in the U.S. Army Air Corps as a weather observer in California and a judge advocate in England during World War II. He met Arlette Micheletti in Paris, France, and they married before returning to the U.S.; they later had two children. When he returned to Oregon, he was appointed as Lane County deputy district attorney by Governor Earl Snell, and quickly rose to district attorney. In 1954, he was appointed as U.S. attorney for the district of Oregon. He then served as a bankruptcy judge from 1961 until his retirement in 1983. He died in 1997.

This oral history interview with C. Edwin Luckey was conducted by James N. Westwood in Beaverton, Oregon, on January 20, 1990. In this interview, Luckey discusses his family background and early life in Eugene, Oregon. He then talks about getting drafted while at the University of Oregon Law School and serving in the U.S. Army Air Corps in Europe during World War II immediately after graduating, including being in London, England, during the Blitz; how Eisenhower was viewed by the troops; and his marriage to Arlette Micheletti in France. He then discusses returning to Eugene, Oregon; practicing law; and serving as a district attorney of Lane County and later as the U.S. attorney for the District of Oregon, including prosecuting several murder cases and Elkins v. United States. He also discusses the politics of the Lane County district attorney's office, arguing before various judges, and his assistant district attorneys and staff. He closes the interview by speaking briefly about working as a bankruptcy judge and about his family life.