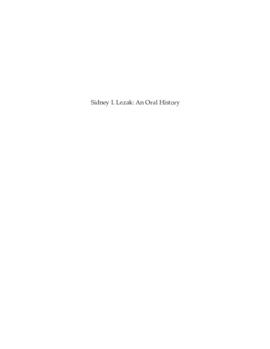 Sidney I. Lezak was born in Chicago, Illinois, in 1924. He attended Northwestern University in Evanston, Illinois, for one semester. He then studied at the University of Chicago. In 1942, he enlisted in the U.S. Air Force, and he served in Europe during World War II. After his discharge in 1945, he returned to the University of Chicago, earning a bachelor of philosophy degree in 1946 and a law degree in 1949. That same year, he and Muriel Deutsch were married; they later had three children. The couple moved to Oregon the night of their wedding. He practiced law in Portland, Oregon, and also served as legal counsel for the Democratic Party of Oregon. He was appointed U.S. attorney for Oregon by President John F. Kennedy in 1961. He resigned in 1982 and worked as a mediator until his death in 2006.

This oral history interview with Sidney Lezak was conducted by Jack G. Collins from August 16, 1988, to June 6, 1990, as part of the United States District Court Oral History Project. The interview was conducted in four sessions, and a transcript is available.

In the first interview session, conducted on August 16, 1988, Lezak discusses his family background and early life in Chicago, Illinois, including the reasons why his family immigrated to the United States from Russia. He speaks at length about jobs he worked, then briefly discusses his studies at Northwestern University in Evanston, Illinois, before he enlisted in the U.S. Air Force in 1942. He speaks at length about his experience during his time in the Air Force during World War II, including his training, his work as a navigator, and his memories of V-E Day and V-J Day. He discusses his political views and his involvement in politics even at a young age. He talks about his marriage to Muriel Deutsch, and about relocating to Portland, Oregon, to practice law at the firm Lensky, Spiegel, Spiegel, and Martindale. He discusses some of the cases he worked on, particularly regarding labor law and civil rights, including the "Mango Ang" case; talks about some of the other law firms he worked for; and shares his experience of arguing before Judge Gus Solomon. He discusses his involvement with the Democratic Party of Oregon, including serving as the organization's legal counsel. He then talks about his service as U.S. attorney for Oregon from 1961 to 1982, including his appointment, his work toward making the U.S. attorney's office non-partisan, and some of the cases he prosecuted, including mail fraud that happened in 1956.

In the second interview session, conducted on December 14, 1988, Lezak continues to discuss his service as U.S. attorney for Oregon. He talks about his experience as the chief federal prosecutor in the District of Oregon, about his acquaintance with Ed Luckey, and about working with the FBI and local law enforcement. He speaks at length about working under U.S. Attorney General Robert F. Kennedy, including a case involving Assistant U.S. Attorney David Robinson, Jim Elkins, and investigator Arthur Kaplan. He then talks about judges on the U.S. District Court that he argued before, including William East, Gus Solomon, and John Kilkenny. He speaks at length about cases that were pending when he began his service as U.S. Attorney, particularly those involving Phil Weinstein and Reuben Lensky. He also discusses a land fraud case that was tried by John Kilkenny.

In the third interview session, conducted on September 7, 1989, Lezak continues to discuss his service as U.S. attorney for Oregon. He speaks at length about civil unrest during the Vietnam War, and about prosecuting protestors and conscientious objectors, including Eric Newhall. He also talks about a conversation he had with Senator Wayne Morse about the Vietnam War. He discusses working on cases regarding draft evasion; about working with Tommy Hawk, who was in charge of handling difficult draft cases; and about working on the case of David Gwyther and Kip Morgan, protestors charged with hindering a draft board meeting. He also shares his memories of draft protester Lance Montauk. He discusses Governor Tom McCall's handling of the 1970 American Legion national convention in Portland. He speaks at length about cases he worked on during the 1970s, including the federal investigation into the Portland Police Bureau's use of lethal force, with a focus on the murder of Ricky Johnson.

In the fourth and final interview session, conducted on June 6, 1990, Lezak continues to discuss his service as U.S. attorney for Oregon. He talks about U.S. District Court judges, including Robert Belloni, William G. East, and Ted Goodwin. He speaks at length about a situation involving Oregon Journal reporter Jim Bonet. He then briefly talks about Mallory Walker, the first Black assistant U.S. attorney. He also speaks about his staff and law clerks, particularly Kristen Olson, who later became U.S. attorney. He shares his memories of the Saturday Night Massacre, when President Richard Nixon attempted to fire the special prosecutor investigating the Watergate scandal. He then discusses the American Indian Movement in Oregon, including relations with the Warm Springs tribe. Lezak discusses his resignation in 1982 in response to the policies of the Reagan administration. He closes the interview by talking about his activities since leaving office, including his career as a mediator.

Handwritten index (17 pages) is available for in-person use at the Oregon Historical Society Research Library.