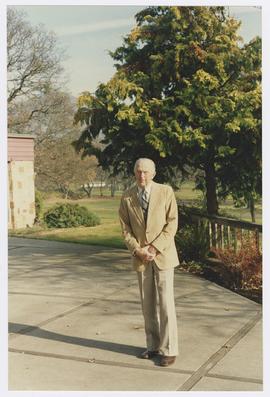 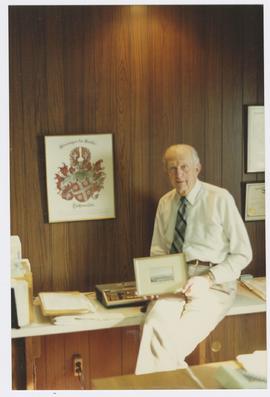 Otto J. Frohnmayer was born in Germany in 1905. His family immigrated to Portland, Oregon, in 1906. He attended the University of Oregon, earning his bachelor's degree in 1929, and then a law degree in 1933. After graduation, he practiced law in Medford, Oregon, with Frohnmayer, Deatherage, Pratt, Jamieson & Turner. He met MarAbel Fisher Braden on a blind date, and they were married in 1936; they later had four children. He was active in many civic organizations in Medford, and was part of the creation of the Rogue Valley Medical Center, Mercy Flights, and the first Medford Arts Council. He died in 2000.

This oral history interview with Otto J. Frohnmayer was conducted by Clark Hansen at Frohnmayer's office in Medford, Oregon, as part of the United States District Court of Oregon Oral History Project. The interview was conducted in two sessions, on November 28, 1989, and December 1, 1989.

In the first interview session, Frohnmayer discusses his family background and early life in Portland, Oregon, including the reasons his family came to the United States, his education, and family vacations to Seaside. He also talks about anti-German sentiment in Portland, Oregon during World War I and how that affected him in his social and political views. He also talks about the fire that happened at Washington High School during his senior year. He discusses working in hotels and attending the University of Oregon, including his social life, studying law, and his experiences during the Depression. He talks about people and professors he met during law school, including Judge William East, and about his involvement with the Law Review.

In the second interview session, Frohnmayer shares his political and social philosophy, and how it was affected by the Depression and World War II. He discusses his early career as a lawyer in Medford, including cases he worked on, his fellow lawyers, and judges he argued before. He also talks about his involvement in several organizations, including the Rogue Valley Memorial Hospital and the Oregon State Bar; and about his involvement in politics, including leadership positions on campaign committees for Mark Hatfield and Wayne Morse. He describes the effects of World War II and the construction of Interstate 5 on Medford. He speaks at length about his work with probate law revision and how he came to focus on it. He discusses his marriage to MarAbel Fisher Braden, and talks about their children and their children's families and careers. He talks about members of the legal profession whom he worked with, and shares his opinion about the qualities that make for great lawyers and judges. He discusses the politics involved in judicial appointments; describes jury trials and appellate hearings; and talks about ethical problems that lawyers face. He also talks about how changes in the legal system have affected his practice and clientele. He closes the interview by talking about his plans for the future.

Handwritten index (12 pages) is available for in-person use at the Oregon Historical Society Research Library.