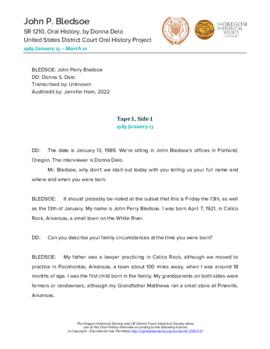 John Perry Bledsoe was born in Arkansas in 1921. He attended the University of Arkansas, earning his bachelor's degree in 1941. He then enrolled at Harvard Law School, but his studies were interrupted by his naval service during World War II; he served in Africa and in the Pacific Theater. After his discharge in 1946, he returned to Harvard Law School, graduating in 1948. He met Helen Wieman while at Harvard, and they married in 1948; they later had five children. After their marriage, they moved to Portland, Oregon, where Bledsoe began practicing law. He was an attorney for Spears, Lubersky, Campbell & Bledsoe in Portland; the firm is now known as Lane Powell. He died in 2011.

This oral history interview with John P. Bledsoe was conducted by Donna Delo at Bledsoe's office in Portland, Oregon, from January 13 to March 10, 1989, as part of the United States District Court Oral History Project. The interview was conducted in five sessions.

In the first interview session, conducted on January 13, 1989, Bledsoe discusses his family background and early life in Pocahontas, Arkansas, including family vacations, the career of his father, John Louis Bledsoe, as a circuit court judge, and his reasons for pursuing a legal career. He speaks at length about his friends, including one who was later lobotomized. He talks about his education, about his involvement in sports, and about childhood games called "Jumper Down" and "Wolf Over the Ridge". He briefly shares his memories of being run over by a car when he was young.

In the second interview session, conducted on January 18, 1989, Bledsoe continues to discuss his early life in Pocahontas, including his religious background, how the town got its name, and his relationship with his parents. He shares his memories of the Great Depression. He then talks about his experiences at the University of Arkansas, including life in a boarding house, his social life, and his classes. He then talks about studying law at Harvard University, and speaks at length about his experiences in the U.S. Navy V7 Program during World War II.

In the third interview session, conducted on February 10, 1989, Bledsoe discusses returning to Harvard Law School after his discharge from the Navy in 1946, and adjusting to civilian life. He talks about his classes, about influential professors, and about his involvement with the Harvard Law Review. He speaks at length about his marriage to Helen Wieman and about their children. He shares his reasons for accepting a job in Portland, Oregon, and talks about practicing law with the Spears, Lubersky, Campbell & Bledsoe firm. He discusses lawyers he worked with, some of his clients, and how the legal profession changed. He speaks at length about some of the cases he tried, including a case involving the Pacific Gas Transmission Company; the Oregon Journal case, which involved attorney Charles Goldman; and a case regarding the Mann Act, also known as the White-Slave Traffic Act of 1910.

In the fourth interview session, conducted on February 17, 1989, Bledsoe continues to discuss some of the cases he worked on, and also talks about his law firm's involvement in the Brown v. Board of Education decision. He briefly shares his memories of the Oregonian newspaper strike in 1959, talks about a trip to Iran in the 1970s, and speaks at length about his involvement with the negotiations for the Champion Cable chain. He speaks further about lawyers he worked with.

In the fifth and final interview session, conducted on March 10, 1989, Bledsoe shares his memories of working with Jim Dezendorf. He then speaks at length about judges Gus Solomon, Alger Fee, and Claude McColloch. He shares his opinion on attributes that make good and bad judges. He also talks about well-known people he went to law school with, including Jack Pemberton, Elliot Richardson, and Bill Bundy. He also talks about his hobbies and involvement with social organizations, including the Arlington Club. He speaks at length about a bike trip in France, and also discusses historical moments that were significant to him. He closes the interview by talking about changes in society over the 20th century, and by sharing advice for aspiring lawyers.