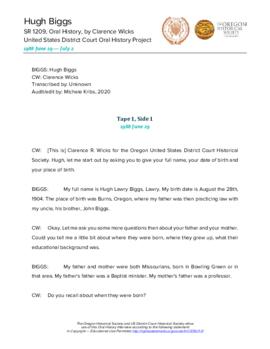 Hugh Lawry Biggs was born in Burns, Oregon, in 1904, and his family moved to Ontario, Oregon, in 1906. He attended the University of Oregon for his entire college education, earning his bachelor's degree in 1927 and his law degree in 1931. He met Elra Ware on a blind date and they married in 1931; they later had two children. He practiced law in Ontario, then served as district attorney for Malheur County from 1933 to 1934. He served as assistant U.S. attorney in Portland from 1934 to 1935. After leaving office, he went into private practice, working with Maguire, Shields & Morrison from 1936 to 1943, and with Stoel, Rives, Boley, Jones & Grey from 1944 to 1972 when he retired. He died in 1996.

This oral history interview with Hugh Biggs was conducted by Clarence Wicks in the offices of Stoel, Rives, Boley, Jones & Grey in Portland, Oregon, from June 29 to July 2, 1988. The interview was conducted in three sessions, and a transcript is available.

In the first interview session, conducted on June 29, 1988, Biggs discusses his family background and early life in Ontario, Oregon, including his siblings and their careers, and his recreational activities. He briefly talks about his mother and his father, Dalton Biggs, who was a Circuit Court judge from 1910 to 1928. He speaks at length about working on his family's ranch in Bridal Veil, Oregon. He briefly talks about studying at the University of Oregon, including his years in law school and serving as dean of men.

In the second interview session, conducted on June 30, 1988, Biggs speaks further about his family background, including his grandfather, grandmother, and aunt. He continues to discuss serving as dean of men at the University of Oregon. He also briefly talks about his experience as a law student, his bar exam, and his law practice in Ontario. He speaks about his marriage to Elra Ware, and discusses their children and their careers. He talks about his experience as a district attorney in Malheur County and as an assistant U.S. attorney in Portland, Oregon. He talks about practicing law with the Maguire, Shields, and Morrison law firm, including cases they worked on. He shares his experiences during the Depression and World War II. He discusses clients he worked with, paticularly the Northern Pacific Railroad.

In the third interview session, conducted on July 2, 1988, Biggs speaks about insurance cases and medical malpractice cases he handled. He speaks about practicing law in Portland, particularly discussing Stoel, Rives, Boley, Jones & Grey and its history, and about lawyers he worked with. He discusses federal cases he worked on, including Perrin v. Aluminum Co. of America. He speaks at length about the judges on the U.S. District Court of Oregon. He closes the interview by discussing his involvement in professional organizations.

A photograph of Hugh Biggs is part of the Oregon Journal Negative Collection, Org. Lot 1368, 372A049, and is viewable online in OHS Digital Collections at https://digitalcollections.ohs.org/hugh-l-biggs-2

Handwritten index (2 pages) is available for in-person use at the Oregon Historical Society Research Library.