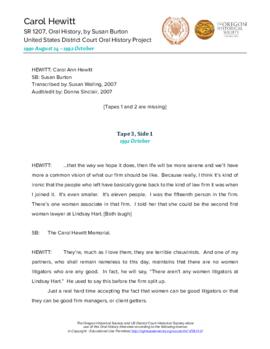 Carol Ann Hewitt was born in Minnesota in 1945. Her family came to Salem, Oregon, when she was a child. She attended St. Olaf College in Minnesota and returned to Oregon to finish her degree at Willamette University. She continued at Willamette, studying law, and earned her law degree in 1969. She spent a year as a clerk at the U.S. District Court of Oregon for Judge Gus Solomon. She then spent many years as an attorney with Lindsay Nahstoll, where she tried many landmark cases on sex discrimination, including Hutchison v. Lake Oswego School Dist. No.7, which partially led to the passage of the 1978 Pregnancy Discrimination Act by the U.S. Congress. She was later a partner with Ater, Wynne, Hewitt, Dodson & Skerrit in Portland, Oregon. She was appointed to the Oregon Investment Council by Governor Vic Atiyeh in 1981, serving as chair from 1988 to 1990, when she resigned from the council. She died in 1993.

This oral history interview with Carol Hewitt was conducted by Susan Burton on August 24, 1990. The audio recording of this interview originally consisted of three audiocassettes. Tapes 1 and 2 are missing as of 2007, and the transcript reflects only the audio on Tape 3. In the portion of the interview on Tape 3, Hewitt discusses facing sexism as a woman lawyer and working at the law firm Lindsay Hart in Portland, Oregon. She then discusses her recent resignation from the Oregon Investment Council. She also discusses the growth of her law firm, Ater, Wynne, Hewitt, Dodson & Skerrit in Portland.

Copyright for this interview is held by the estate of Carol Hewitt. In Copyright, http://rightsstatements.org/vocab/InC/1.0/