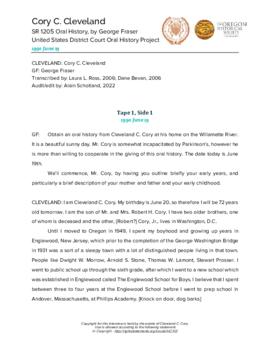 Cleveland Cady Cory was born in 1918 and grew up in New Jersey. He graduated from Yale Law School in 1943 and joined the Davis & Polk law firm in New York City, where his clients included Prince Edward, the Duke of Windsor. In 1948, he and Jean Crenshaw were married; they later had six children. In 1949, he moved to Oregon, where he joined a law firm in Portland now known as Stoel Rives. He died in 1991.

This oral history interview with Cleveland C. Cory was conducted by George Fraser as part of the United States District Court Oral History Project. The interview was conducted in two sessions.

In the first interview session, conducted at Cory's home in Portland, Oregon, on June 19, 1990, Cory discusses his family background and early life in Englewood, New Jersey. He then discusses his college experience, including attending Yale Law School from 1940 to 1943. He talks about working for the Davis & Polk law firm in New York, including representing Prince Edward, the Duke of Windsor, as well as various railroads. He then discusses relocating to Oregon in 1949 and his reasons for doing so, including seeking an improved quality of life and the difficulty of becoming a partner at a New York law firm. He talks about his career at a law firm in Portland, now known as Stoel Rives, including many of the cases he tried. He also briefly discusses his renowned memory for cases.

In the second interview session, conducted at a later, unidentified date at the Crestview Convalescent Home in Portland, Oregon, where Cory was recovering from a broken shoulder, Cory further discusses his early employment in Portland.

Copyright for this interview is held by the estate of Cleveland C. Cory. Use is allowed according to the following statement: In Copyright: http://rightsstatements.org/vocab/InC/1.0/