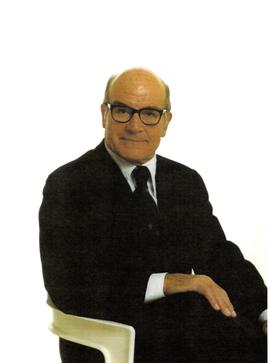 Wendell Oliver Gray was born in Prineville, Oregon, in 1908. He studied law at the University of Oregon, but was unable to finish due to a case of appendicitis around 1928. While at the university, he met Jean Patrick. They married in 1936 and later had two children. After Gray worked for a few years, he finished his studies at the Northwestern College of Law in Portland, graduating in 1934. He began practicing law in Portland, specializing in maritime law. In 1937, he got the Fireman's Fund Insurance Company as a client. During World War II, that company serviced the entire U.S. domestic fleet. He was on the board of directors of Family Life, a mortgage insurance company, from 1951 until it was purchased by Merrill Lynch in the mid-1970s. Gray was chairman of the Portland Chamber of Commerce from 1951 to 1952, and he served on the Portland School Board from 1948 to 1956. He resigned from law practice in 1971. Jean died in 1972, and in 1973, he and Diana Barnard were married. Gray died in 1995.

This oral history interview with Wendell Gray was conducted by Elizabeth Reichow and James Strassmaier from January 7, 1992, to October 28, 1993. In the first part of this interview, conducted by Elizabeth Reichow on January 7, 1992, Gray discusses his family background and early life on a ranch in Prineville, Oregon. He discusses having to quit law school at the University of Oregon due to appendicitis, returning to Prineville and working various jobs, and then attending the Northwestern College of Law in Portland, Oregon. He talks about his early law career as an insurance investigator while he was in law school, and about foreclosing mortgages with his uncle, Guy LaFollette, during the Depression. He then discusses practicing maritime law and the many clients he represented in the Portland area, particularly during World War II. He also discusses a trip he and his wife, Jean Patrick, took to East Asia in 1964. He goes on to talk about many of the maritime cases he worked on and the clients he represented over his career, as well as the other maritime lawyer in Portland, Erskine Wood. He talks about being on the board of directors of the Family Life Insurance Company; real estate investments; and chairing the Portland Chamber of Commerce.

In 1992, Wendell Gray narrated three tapes on his own. On these tapes, he speaks at length about "interesting people," including Dale, Mac, and Sib Smith of the Smith Brothers Office Outfitters; Orren Brownson; and Tom Cummins. He also talks about serving on the Portland School Board from 1948 to 1956, including the sale of the Lincoln High School building in downtown Portland.

The final part of the interview was conducted by Jim Strassmaier at Gray's home in Portland from October 26-28, 1993. Diana Gray was also present. In this portion, Gray discusses his education at the University of Oregon from 1925 to 1928, including his social life, his involvement with the Pi Kappa Alpha fraternity, and meeting his first wife, Jean Patrick. He then discusses some of his recreational activities, including his involvement with the Deschutes Club, golfing, and the various golf clubs in the Portland area. He discusses serving on the Portland School Board from 1948 to 1956, including his election, policies they adopted, funding, and construction of new school buildings. He also briefly talks about Judge Gus Solomon. He closes the interview by talking about his children and family life.

Incomplete transcript (178 pages) and handwritten index (4 pages) are available for in-person use at the Oregon Historical Society Research Library.