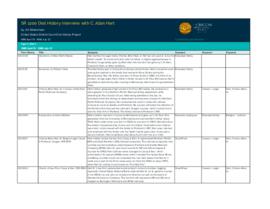 Charles Allan Hart, Jr. was born in Minnesota in 1909. His family moved to Portland, Oregon, in 1911 and he spent the bulk of his childhood in the Irvington and Portland Heights neighborhoods. He attended Stanford University and Yale Law School. He returned to Portland in 1935 and joined his father's law firm, Hart, Spencer & McCulloch. He was an assistant U.S. attorney from 1936 to 1938. He then worked as counsel for the Bonneville Power Administration from 1938 to 1941. He was drafted in 1942 and served as an officer in the U.S. Army's Judge Advocate General Corps during World War II. He married Ruth Patterson in 1942 before being shipped out to serve in the Philippines and Japan. The couple later had three children. After his discharge in 1946, Hart practiced law at Pendergrass, Spactlan and Bullivant. In 1956, he left to form the Hart, Davidson, and Veazie law firm. In 1957, Governor Bob Holmes appointed Hart to the State Board of Higher Education. He served in that position until 1964. He was also active in the Oregon Democratic Party, the Portland chapter of the American Civil Liberties Union, the Sylvan School District Board from 1952 to 1956, and the Catlin Gabel School Board from 1962 to 1971. He was also campaign chair for Maurine Neuberger during her successful run for a U.S. Senate seat in 1960. In 1968, he switched law firms, moving to Lindsay, Nahstoll, Hart, and Krause. Hart retired from practicing law in 1985. He died in 2002.

This oral history interview with Allan Hart was conducted by James Strassmaier at Hart's office in the KOIN Center in Portland, Oregon, from April 15 to July 22, 1986. In this interview, Hart discusses his family background and early life in Portland, Oregon, including his education at Moran School. He talks about his education at Stanford University and Yale Law School, including his social life, his friendship with Boyd McNaughton, working for the Stanford and Yale papers, and the relationship between Yale and Harvard. He then discusses returning to Portland, joining his father's law firm, and cases he argued. Hart talks about serving as an assistant U.S. attorney from 1936 to 1938 and cases he prosecuted, including liquor and narcotics cases. He also discusses the Lawyers Guild and the Oregon State Bar; his investigations into the Red Squad; the De Jong case; and his work on an antitrust case involving the American Medical Association. He then discusses his work as counsel for the Bonneville Power Administration from 1938 to 1941, including the beginnings of BPA, as well as dealing with private utilities and aluminum companies, particularly PGE and Alcoa. Hart also describes his experience during World War II as an officer in the Judge Advocate General Corps in the Pacific Theater, and then during the occupation of Japan.

Hart discusses his return to law practice in 1946. He talks about taking on the Kenji Namba v. McCourt case as a way to overturn the Alien Land Law. He briefly discusses his involvement with the Oregon Democratic Party, as well as raising a family. He talks about establishing the Hart, Davidson, and Veazie firm in 1956, including working with Jebbie Davidson, as well as the subsequent changes the firm underwent, which ultimately led him to the law firm of Lindsay, Nahstoll, Hart, and Krause. He discusses his involvement with the American Civil Liberties Union and civil rights cases that he worked on. He discusses his involvement with education, including serving on the board of the Sylvan School District from 1952 to 1956, and facing issues of school funding; serving on the State Board of Higher Education; and serving on the board of Catlin Gabel School. Hart speaks at length about discriminatory practices at many Portland social clubs, as well as U.S. District Court Judge Gus Solomon's efforts against them. He then discusses his relationships with Solomon and U.S. Supreme Court Justices William O. Douglas and Abe Fortas. Hart talks about his stymied aspirations of being appointed as a judge; political infighting in the Democratic Party; and additional cases he worked on. He revisits the topic of the Bonneville Power Administration, describing the changes it underwent after World War II, as well as the WPPSS crisis of the 1980s. Hart closes the interview by discussing his retirement activities.

Incomplete transcript (492 pages) is available for in-person use at the Oregon Historical Society Research Library.