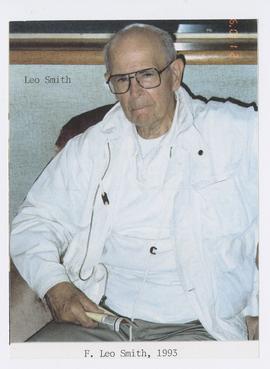 Frank Leo Smith was born in Portland, Oregon, in 1903. He attended Columbia University (now the University of Portland); Gonzaga University in Spokane, Washington; and Georgetown University Law School in Washington, D.C. He earned his law degree in 1928, and joined a law firm in Portland in 1929. He met Josephine Gleason after returning to Portland, and they were married in 1932; she died in 1960. Smith was elected as a Democrat to represent Multnomah County in the Oregon House of Representatives from 1939 to 1944. He left the Legislature to continue in private law practice, and later also worked as a lobbyist for the Oregon State Employees Association, helping to establish the Public Employees Retirement System. He also lobbied for the University of Portland and the Archdiocese of Portland. In 1957, he was appointed to replace Multnomah County district attorney William Langley, who was removed from office. Smith left that office in 1958. In 1960, he and Dorothy McMahon were married; she died in 1980. In 1995, he and Frances Ritz Donnerberg were married. He died in 1999.

This oral history interview with F. Leo Smith was conducted by Clark Hansen at Smith's home in Portland, Oregon, from September 23 to October 28, 1993. In this interview, Smith discusses the history of the Ku Klux Klan and anti-Catholic sentiment in Oregon. He then discusses the policies of the Democratic Party in the early 20th century, particularly in Oregon, and his involvement with the party. He describes his early law career in private practice during the Depression. He talks about his time in the Oregon House of Representatives from 1939 to 1944, including his campaigns, constituency, and committee assignments. He speaks at length about legislation he worked on in the House, particularly a bill on textbooks in public schools that was later overturned by the Oregon Supreme Court. He then discusses his brief term as Multnomah County district attorney, from 1957 to 1958, and the many vice cases he prosecuted. He also talks about his involvement with the Catholic Church as a member, lawyer, and lobbyist. He discusses his later career as a lobbyist, particularly his work on establishing the Public Employees Retirement System while lobbying for the Oregon State Employees Association, and in defeating a bill on abortion while lobbying for the Archdiocese of Portland. He closes the interview by talking about the changes in society over the 20th century.

Joint copyright for this interview is held by the Oregon Historical Society and the estate of F. Leo Smith. Use is allowed according to the following statement: In Copyright – Non-Commercial Use Permitted: http://rightsstatements.org/vocab/InC-NC/1.0/

Handwritten index (28 pages) is available for in-person use at the Oregon Historical Society Research Library.