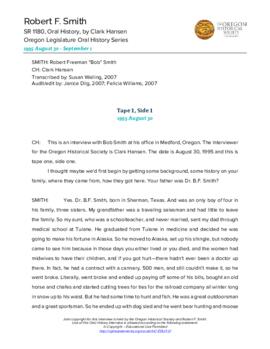 Robert Freeman "Bob" Smith was born in 1931 in Burns, Oregon. He studied pre-med and economics at Willamette University. While in college, both of his parents died within a year of each other, and Smith inherited the family ranching business. After his graduation in 1953, he started several successful businesses, including in construction, tires, and wholesale gasoline. He was involved in a number of civic organizations, including the Burns Chamber of Commerce and the Board of Trustees for the Oregon State Library. He was elected as a Republican to the Oregon House of Representatives in 1960. He met Kaye Tomlinson on a blind date in 1965, and they married the next year; they later had three children. From 1969 to 1973, he served as speaker of the Oregon House. From 1973 to 1982, Smith served in the state Senate. He also served in the United States House of Representatives from 1982 to 1994 and again from 1997 to 1999. During his seven terms in the House, he served on both the House Committee on Agriculture and the House Committee on Resources.

This oral history interview with Robert F. Smith was conducted by Clark Hansen at Smith's office in Medford, Oregon, from August 30 to September 1, 1995. In this interview, Smith discusses his family background and early life in Burns, Oregon. He talks about his interest in basketball while attending Willamette University. He also talks about running a ranch and multiple other businesses after graduation; his flying hobby; and his involvement with a number of civic organizations. He goes on to talk about being recruited to run for the Oregon Legislature by members of the Oregon Republican Party, and his time in the Oregon House of Representatives from 1960 to 1973. He discusses his campaigns, committees, fellow legislators, and legislation that he worked on. He talks about Tony Yturri, Monte Montgomery, Bill Holmstrom, Stan Ouderkirk, Clarence Barton, and Stafford Hansell. He discusses legislation on agriculture, taxes, labor, forestry and land use. He also talks about how his leadership style as speaker of the House from 1969 to 1973, and about his legislative agenda. He closes the interview by discussing the social life of legislators.

Joint copyright is held by the Oregon Historical Society and Robert F. Smith. Use is allowed under: In Copyright – Educational Use Permitted http://rightsstatements.org/vocab/InC-EDU/1.0/