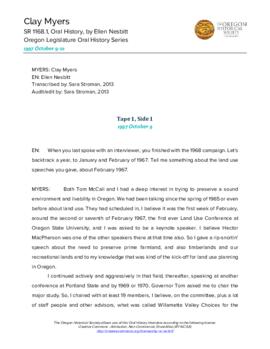 Henry Clay Myers, Jr. was born in Portland, Oregon, in 1927. He grew up in Tillamook, Oregon, and also spent a year of his childhood in Southern Rhodesia (now Zimbabwe) from 1938 to 1939. In 1945, he graduated from Benson High School in Portland and enlisted in the U.S. Navy. He was reassigned to the U.S. Coast Guard Academy in Connecticut, then discharged later that same year. He returned to Oregon, and in 1946, he began attending the University of Oregon, where he was involved with the Young Republicans. After graduating in 1949, he continued his studies at Northwestern College of Law in Portland, graduating in 1953. He started his career as an estate planner and insurance salesman for Aetna in 1953. His insurance work took him to New England, where he met Elizabeth Lex Arndt through the Young Republicans. They were married in 1955; they later had one child and adopted two. They returned to Oregon in 1956. Myers was active in Republican politics and served as Oregon secretary of state from 1967 to 1977, and then as Oregon treasurer from 1977 to 1984. He was also deeply involved in the Episcopalian church. Late in his life, he changed his party affiliation, first to Independent in 1999, then to Democrat in 2003. He died in 2004.

This oral history interview with Clay Myers was conducted by Ellen Nesbitt from October 9-10, 1997. In this interview, Myers discusses his terms as Oregon secretary of state from 1967 to 1977, as well as his term as Oregon treasurer from 1977 to 1984. He discusses his main accomplishments in those offices, including working with Tom McCall in the creation of the Willamette Greenway and SB 100, Oregon's landmark land-use planning legislation, as well as his role in bringing Intel to Oregon. Myers then discusses his involvement in the Episcopal Church, including the changes in the church since he first joined as a teenager in the 1940s, particularly on the subjects of the inclusion of women clergy in 1976, birth control, and views on homosexuality. He speaks at length about the evolution of his own views on LGBTQ people.