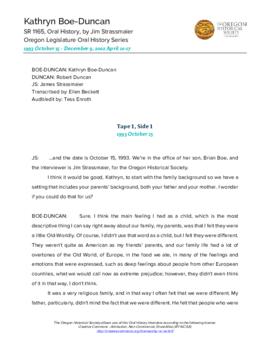 Kathryn Boe-Duncan was born Kathryn Reule in Portland, Oregon, in 1930. She studied education at Pacific Lutheran University in Tacoma, Washington. She met Jason Boe while in college, and they were married in 1952; they later had three children. After Jason Boe finished his studies, they settled in Reedsport, Oregon, where he first gained political office as a member of the city council. The family moved to Salem, Oregon, for most of the year beginning in 1964, when Jason Boe was elected to the Oregon House of Representatives. Boe-Duncan worked as his secretary during his six-year term. She continued to work as his secretary for much of the period from 1970 to 1980, when he served in the Oregon Senate. Jason Boe died in 1990. Boe-Duncan had a career as a musician, beginning in the 1970s, and she performed in the Coos Bay Bach Festival for over a decade. She worked for the Oregon Historical Society from 1986 to 1989 and for Portland State University from 1989 to 1994. In 1995, she married Robert Duncan, who was also an Oregon state senator, and changed her surname to Boe-Duncan.

This oral history interview with Kathryn Boe-Duncan was conducted by Jim Strassmaier in Portland, Oregon, from October 15 to December 9, 1993, and on April 10, 2002. Robert Duncan was also present. In this interview, Boe-Duncan discusses her family background and early life in Portland, Oregon; her Lutheran upbringing; her early interest in music; her high school experience; and attending Pacific Lutheran University. She then discusses her marriage to Jason Boe and the difficulties involved in getting married at a young age. She talks about Jason Boe's early political career and involvement with the Democratic Party; daily life in Reedsport, Oregon, in the 1950s; and raising a family. She then discusses working as Jason Boe's secretary while he served in the Oregon House of Representatives from 1964 to 1970, including his campaigns. She also speaks about preparing the family to move to Salem, Oregon; social life in Salem, including her relationships with other politicians' wives; and the duties of a representative's secretary. She speaks at length about Jason Boe's legislative record in the Oregon Senate from 1970 to 1980, particularly his work advancing the legislative agenda of Governor Tom McCall. She also talks about his service as president of the Senate from 1973 to 1980, his work on improving the Capitol building, and his efforts in strengthening the power of the legislative branch. She also describes Jason Boe's political ambitions. Boe-Duncan then talks about Jason Boe's activities after leaving the Legislature, including his work as a lobbyist. She describes her career as a musician, which she began pursuing at age 40, as well as her work for the Oregon Historical Society from 1986 to 1989, and for Portland State University from 1989 to 1994. She closes the interview by talking about her marriage to Robert Duncan in 1995 and her family life.

Handwritten index (9 pages) is available for in-person use at the Oregon Historical Society Research Library.