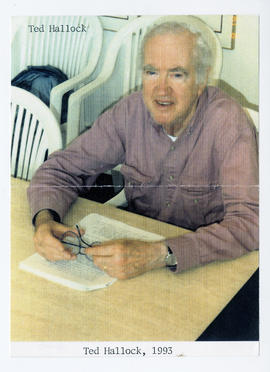 Joseph Theodore "Ted" Hallock was born in Los Angeles, California, in 1921. His family came to Portland, Oregon, in 1927. He began working in broadcasting while still in high school when his cousin, Homer Welch, got him a job in sound effects at KGW radio. He studied law at the University of Oregon, but joined the Air Force shortly after the bombing of Pearl Harbor. He and Muriel Myers married before his deployment. They divorced soon after he returned from the war in 1945. Shortly thereafter, he met Phyllis Natwick at a fundraiser, and they married in 1946. He gave up his plans to study law and went into journalism instead. He won several awards for his broadcasting work, including a Peabody. His work in journalism took him to England and Russia during the 1950s. In 1959, he founded an advertising agency, the Hallock Agency. He represented Multnomah County in the Oregon State Senate as a Democrat from 1963 to 1982. In 1968, he divorced again; he and Jackie Hull were married soon after. From 1988 to 1994, he was a member of the Northwest Power Planning Council. Hallock died in 2006.

This oral history interview with Ted Hallock was conducted by Clark Hansen at the Hallock Agency in Portland, Oregon, from March 15 to November 2, 1993. In the interview, Hallock discusses his family background and early life, mostly in the Irvington neighborhood of Portland; growing up during the Depression; and his early career in broadcasting, starting out in sound effects at KGW. He also discusses his interest in music; attending the University of Oregon; and his service as a bombardier in the Air Force during World War II and its effect on his life. Hallock discusses his decision to pursue a career in journalism and winning a Peabody Award for his radio broadcasting work at KPOJ.

Hallock talks about his experiences as a senator in the Oregon Legislature, and discusses many of the senators he worked with, such as Harry Boivin, Don Willner, Ben Musa, Tony Yturri, and Jason Boe. He also discusses his advertising agency, the Hallock Agency, and working on election campaigns, including U.S. Senator Wayne Morse's campaigns. Hallock details the some of the legislation he worked on while serving in the Oregon Senate from 1963 to 1982, including on health care and fluoridation; labor laws; sex education and abortion access; environmental regulations, land use planning, and SB 100; and electrical utilities. He also discusses his experiences working with governors Mark Hatfield, Tom McCall, Vic Atiyeh and Neil Goldschmidt. Hallock closes by discussing his work on the Northwest Power Planning Council, including energy conservation, nuclear waste disposal, and preservation of endangered species, particularly salmon.

Incomplete transcript (276 pages) is available for in-person use at the Oregon Historical Society Research Library.