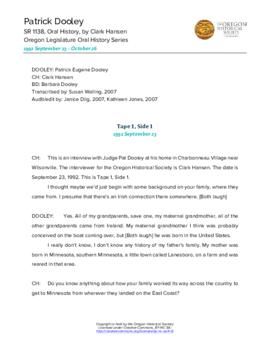 Patrick Eugene Dooley was born in Portland, Oregon, in 1918. He dropped out of high school during the Depression, when his family moved to Washington state for his older sister's education. He returned to Portland a few years later. In 1942, he and Barbara Lynch were married; they later had three children. Later in 1942, he was drafted, and he served in the U.S. Army in North Africa and Italy during World War II. After his discharge in 1945, he was determined to go to law school. He attended Reed College for a semester, then earned a law degree from Northwestern College of Law around 1950. He passed the Oregon bar exam that same year, and began practicing law in Portland with former legislator Leo Smith. He was a Democratic politician and represented Multnomah County in the Oregon House of Representatives from 1953 to 1958, serving as speaker from 1957 to 1958. He returned to private law practice after leaving elected office, until he was elected as a judge on the Multnomah County Circuit Court in 1968. He retired in 1983 and died in 1999.

In this interview, Dooley discusses his family background and early life in the Albina neighborhood of Portland, Oregon, including his early education at Catholic schools and his experience during the Depression. He talks about moving to Washington for his sister's education and about working various jobs. He then discusses his service in the U.S. Army in North Africa and Italy during World War II. He also talks about his marriage to Barbara Lynch in 1942. He discusses his determination to go to law school after his discharge in 1945; attending Reed College while working full time; studying law at Northwestern College of Law; and taking the Oregon bar exam. He talks about practicing law in Portland with Leo Smith, including some of the judges he argued before and some of the cases he handled.

Dooley discusses his involvement with the Democratic Party and his service in the Oregon House of Representatives from 1953 to 1958. He describes his campaigns, his committee assignments, and legislation he worked on, particularly regarding taxes. He talks about Governor Paul Patterson's administration, as well as some of Dooley's fellow legislators. He also discusses partisanship in the Legislature and his role in the formation of party caucuses. He talks about his experience as speaker of the House from 1957 to 1958, including serving as acting governor, making committee assignments, and working with Governor Bob Holmes.

Dooley discusses serving as a Multnomah County Circuit Court judge from 1968 to 1983. He talks about court procedure, cases he heard, and his feelings about handing down sentences. He spends some time looking at a scrapbook and talking about the photographs and articles in it. He talks about judges and lawyers he worked with and admired; changes in the legal profession; and his philosophy of law. He closes the interview by reflecting on Oregon political history and his own accomplishments.