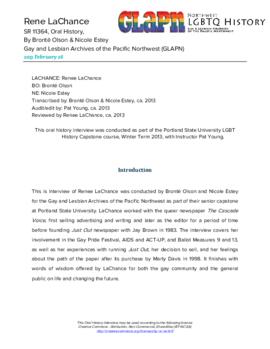 This is interview of Renee LaChance was conducted by Brontё Olson and Nicole Estey for the Gay and Lesbian Archives of the Pacific Northwest as part of their senior capstone at Portland State University. LaChance worked with the queer newspaper The Cascade Voice, first selling advertising and writing and later as the editor for a period of time before founding Just Out newspaper with Jay Brown in 1983. The interview covers her involvement in the Gay Pride Festival, AIDS and ACT-UP, and Ballot Measures 9 and 13, as well as her experiences with running Just Out, her decision to sell, and her feelings about the path of the paper after its purchase by Marty Davis in 1998. It finishes with words of wisdom offered by LaChance for both the gay community and the general public on life and changing the future.