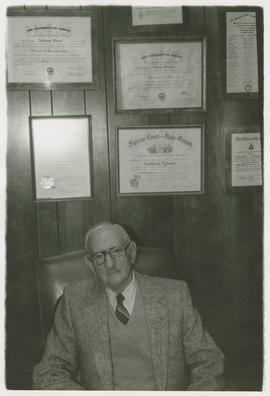 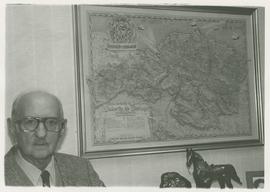 Anthony "Tony" Yturri was born in 1914 in Jordan Valley, Oregon. His parents were Basque immigrants. He studied law at the University of Oregon, earning his law degree in 1937. After passing the bar the same year, he accepted a position working with Alan Biggs, a district attorney in Ontario, Oregon. He later became attorney for the city. In 1942, he and Remedios "Reme" Jayo were married; they had no children. He enlisted in the U.S. Army and served from 1942 to 1946 in the counterintelligence branch and the judge advocate general's department. Later, Yturri, a Republican, represented Baker, Grant, Harney and Malheur counties in the Oregon Senate from 1963 to 1972. After leaving the Legislature, he was twice offered a seat on the Oregon Supreme Court, but he refused both times. He was appointed to chair the Oregon Transportation Commission by Governor Tom McCall, serving from 1979 to 1987. He died in 1999.

This oral history interview with Tony Yturri was conducted by Jim Strassmaier at Yturri's office in Ontario, Oregon, from November 19-21, 1990. In this interview, Yturri discusses his family background and early life in Jordan Valley, Oregon, including Basque culture and his father's store. He talks about attending the University of Oregon, and discusses studying law, his social life, and his professors, including Orlando Hollis and Wayne Morse. He then talks about relocating to Ontario, Oregon, to work in the district attorney's office, and his experience as city attorney. He briefly talks about his military experience during World War II, from 1942 to 1946, particularly his counterintelligence work, and the adjustment to civilian life after the war.

Yturri then discusses his service in the Oregon Senate from 1963 to 1972. He talks about his campaigns, his involvement with the Republican Party, and his constituency. He describes the organization and procedures of the Senate. He talks about legislation he worked on, including on taxes, trucking, reapportionment, and water rights. He talks about his fellow legislators, including Monroe Sweetland, Bob Duncan, Vic Atiyeh, John Burns, Monte Montgomery, and Jason Boe. He describes working with the Mark Hatfield and Tom McCall administrations, the transportation commission under Glenn Jackson, and lobbyists. He also talks about his opinion on the Vietnam War; health issues that prevented him from considering a run for the governorship; and the rise of the conservative branch of the Republican Party. Yturri talks about serving as chair of the Oregon Transportation Commission from 1979 to 1987, particularly regarding a misunderstanding he had with the director of the Department of Transportation, Neil Goldschmidt. He closes the interview by talking about his retirement activities and family life.

Joint copyright is held by the Oregon Historical Society and the estate of Tony Yturri. Use is allowed according to the following statement: In Copyright – Non-Commercial Use Permitted: http://rightsstatements.org/vocab/InC-NC/1.0/

Incomplete transcript (211 pages) is available for in-person use at the Oregon Historical Society Research Library.