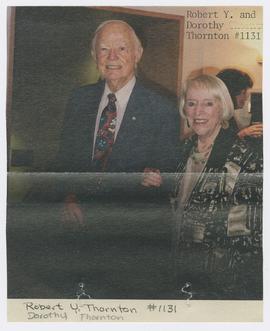 Robert Young Thornton was born in Portland, Oregon, in 1910. He earned a bachelor's degree from Stanford University in 1932. He then studied law at the University of Oregon, completing his law degree at George Washington University in 1937. He met Dorothy Marie Haberbach while at the University of Oregon, and they were married in Washington, D.C., in 1937. They later had one child. Thornton worked various political jobs in Washington, D.C., for a few years, then he returned to Oregon and practiced law in Tillamook. He joined the Reserve Officer Training Corps while at Stanford, and in 1941 he joined the U.S. Army, where he studied Japanese and used his language skills to teach others and conduct interrogations of Japanese prisoners of war during World War II. After his discharge in 1946, he returned to his law practice in Tillamook. He continued to occasionally do intelligence work for the U.S. Army. Thornton, a Democrat, represented Tillamook County in the Oregon House of Representatives from 1951 to 1952, and then served as attorney general for Oregon from 1953 to 1967. In 1962, he was the Democratic nominee for Oregon governor, but was defeated by Republican Mark Hatfield. A few years after the end of his 16-year term as attorney general, he served as a judge on the Oregon Court of Appeals from 1971 to 1983. He died in 2003.

This oral history interview with Robert Thornton was conducted by Jim Strassmaier at the Oregon Historical Society in Portland, Oregon, from May 21 to September 10, 1990. In this interview, Thornton discusses his family background and early life in the Ladd's Addition neighborhood of Portland. He talks about his education, including his study of Japanese and music, and attending Stanford University. He also describes his experiences during the Depression and how it and the New Deal shaped his political views. He then discusses studying law at the University of Oregon and George Washington University. He discusses his career path, from working for Congress, the Court of Appeals, and the Interior Department in Washington, D.C., to his return to Oregon, where he practiced law in Medford and Tillamook. He briefly discusses some of the cases he worked on before he joined the U.S. Army in 1941. He talks about his military experience during World War II, particularly his work teaching Japanese and conducting interrogations of Japanese prisoners of war. He then talks about returning to law practice in Tillamook after his discharge in 1946. He mentions his continued occasional intelligence work for the U.S. Army throughout the interview.

Thornton discusses his political career, beginning with his term in the Oregon House of Representatives from 1951 to 1952. He talks about his involvement with the Democratic Party, his campaign, and his constituency. He discusses legislation he worked on, including on law enforcement, fishing, and relations with Japan. He also discusses some of his fellow legislators, including Dick Neuberger and Maurine Neuberger, and Rudie Wilhelm. He then discusses his service as Oregon attorney general from 1953 to 1967. He discusses his campaigns, his relationships with district attorneys throughout Oregon, and working with various Oregon governmental agencies. He talks about some of the cases he prosecuted, including on vice, particularly the Jim Elkins case. He also talks about his efforts toward a crime prevention program, as well as his observations on the corruption of law enforcement. He briefly talks about running for other offices during his term as district attorney, including his 1962 campaign for governor. He also discusses the court case surrounding his re-election defeat by Lee Johnson in 1966. He goes on to discuss his service as a judge on the Oregon Court of Appeals from 1971 to 1983. He speaks about the role and procedures of the judicial branch in Oregon. He also talks about his fellow judges, including George Joseph and Betty Roberts. He also gives his opinions on national politics of the 1960s, 1970s, and 1980s, including the John F. Kennedy administration, the Vietnam era, and the economic policies of the Ronald Reagan administration. He closes the interview with a discussion of recent U.S. Supreme Court cases, particularly regarding gun control.

Additional oral history interviews with Robert Y. Thornton are held in the collections of the Oregon Historical Society Research Library.

Typewritten index (35 pages) is available for in-person use at the Oregon Historical Society Research Library.