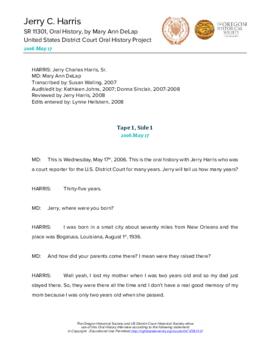 Jerry Charles Harris, Sr. was born in Bogalusa, Louisiana, in 1936. He relocated to Denver, Colorado, as a young child. He came to Portland, Oregon, to meet Zola M. Barnes at the recommendation of his godmother, and they were married in 1956; they later adopted two children. Harris had been attending Western Business College in Colorado, but after moving to Oregon he attended Court Reporting College in Portland, graduating in 1961. In 1962, he became the only black court reporter for the Multnomah County courts. In 1965, he began working as a court reporter for U.S. District Court Judge Gus Solomon. He later worked for other judges on the U.S. District Court of Oregon, and retired in 1997. He was a member of the Community Church of God (now Maranatha) and served as a Sunday school teacher, usher, elder, and chairman of the church board. Harris died in 2011.

This oral history interview with Jerry C. Harris was conducted by Mary Ann DeLap on May 17, 2006. In this interview, Harris discusses coming to Portland, Oregon, from Colorado to meet his future wife, Zola M. Barnes. He talks about working as a court reporter for the Multnomah County courts and his experience as the only black court reporter for the county. He discusses moving to the federal court system and working for U.S. District Court Judge Gus Solomon. He also talks about working for other judges on the U.S. District Court of Oregon. He discusses the discrimination he's faced, his retirement activities, and some of the lawyers he worked with. He describes the process of court reporting, as well as how technology has changed the profession.