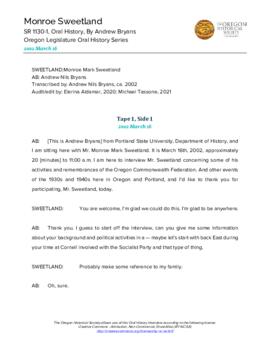 Monroe Mark Sweetland was born in Salem, Oregon, in 1910. His family moved to Michigan in about 1915, and he spent the bulk of his childhood. He began his involvement with the Democratic Party when he was just 10 years old by clandestinely organizing a party meeting. He entered Wittenberg University in Ohio at age 16, then attended Cornell University and Syracuse Law School in New York. He met Lillie Megrath while attending Syracuse Law School and they were married in 1933. He returned to Oregon in 1935 and subsequently worked with the Commonwealth Federation, promoted progressive politics, and was instrumental in the rise of the Democratic Party to political power in the state. He also owned several newspapers in Oregon, including the Molalla Pioneer, the Newport News, and the Milwaukie Review. He represented Clackamas County in the Oregon House of Representatives 1953, and served in the Oregon Senate from 1955 to 1962. After leaving the Legislature, he moved to California and lobbied for the National Educaton Association. After retiring from politics, he began a business selling dried floral arrangements, called Western Wilderness Products. He returned to Oregon after his wife, Lillie, died in 1985, and he ran unsuccessfully for the Oregon Senate again in 1994. He died in 2006.

This oral history interview with Monroe Sweetland was conducted by Andrew Bryans on March 16, 2002. In this interview, Sweetland discusses his family background and early life, including his childhood in rural Michigan; his early involvement in Democratic politics; and his experiences at Cornell University. He discusses his political activism during college, including his involvement with the Student League for Industrial Democracy and his political activism on behalf of Socialist candidates. Sweetland also discusses his political activities after his return to Oregon in 1935, including his work with the Oregon Commonwealth Federation and his decision to leave the Socialist Party and join the Democratic Party. Also discussed is his work with labor unions; the New Deal programs; and his work with the Oregon Democratic Party. He briefly talks about World War II and its effect on Oregon politics, particularly the effect the Hitler-Stalin pact had on American communists and the Oregon Commonwealth Federation; internment of Japanese-Americans; and his own pacifism.

Incomplete transcript (86 pages) is available for in-person use at the Oregon Historical Society Research Library.