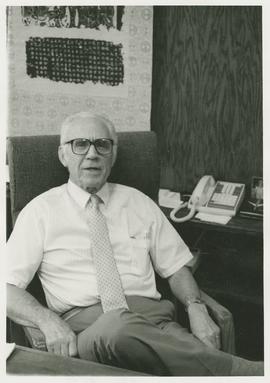 Charles Orlando Porter was born in Klamath Falls, Oregon, in 1919. His family moved to Eugene while he was still young. He was interested in journalism at an early age and wrote editorials for his high school paper as well as the Eugene Morning News. He graduated from Harvard with a bachelor of science degree in 1941. From 1941 to 1945, he served in the U.S. Army in Panama and Europe during World War II. He and Priscilla Porter married in 1943 while he was on leave; they later had four children. He returned to Harvard after the war, and graduated from Harvard Law School in 1947. He and his young family returned to Oregon, where he took a job on the state Highway Commission, practiced law in Eugene, and became involved in politics. He was a Democratic politician and represented the Oregon Fourth District in the United States House of Representatives from 1956 to 1960. After leaving Congress, he returned to private law practice and attempted several more runs for office. He died in 2006.

This oral history interview with Charles O. Porter was conducted by Jim Strassmaier at Porter's office in Eugene, Oregon, from July 18 to November 7, 1986. In this interview, Porter discusses his family background and early life in Eugene, including his education at Eugene High School, working for newspapers in the area, and his early political ambitions. He then talks about attending Harvard. He speaks at length about his experiences in Panama, and later in Europe, during World War II. He then talks about returning to Harvard, job prospects, and returning to Oregon to take a job on the state Highway Commission. He discusses practicing law in Eugene, including his experience with various judges, some of the cases he worked on, and the administration of justice. He then talks about getting involved in politics, including being offered the position of assistant to the U.S. attorney general by Monroe Sweetland. He turned down the offer and ran for Congress instead.

Porter discusses representing the Fourth District of Oregon in the U.S. House of Representatives from 1956 to 1960, particularly his campaigns. He talks about his fellow legislators, including Wayne Morse, Maurine Neuberger, Edith Green, and Joseph McCarthy. He discusses parliamentary procedure and legislation he worked on, particularly on foreign policy in Latin America. He also talks about his relationship with the press; his involvement with Amnesty International; and his activities as a lawyer after his 1960 re-election loss. He discusses many of the cases he worked on, including on prisoners' rights, fluoridation, sterilization, and a case against the Air Force. He closes the interview by talking about his family and the livability of Oregon.