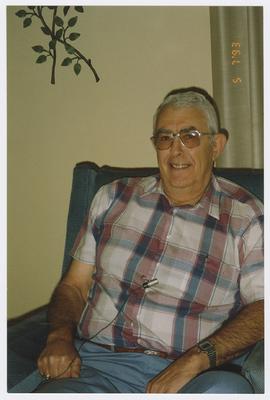 Lyndel "Lynn" Warren Newbry was born in Talent, Oregon, in 1923. He attended Oregon State College (now Oregon State University). He was drafted in 1943 and was sent into Army Specialized Training, which led him to study engineering at Pomona College in California. He and Charlotte Short were married in 1943. He then switched to the Air Force and was discharged in 1945. He returned to Talent to take over the running of his family's orchard, Newbry Orchards. He was a Republican politician and represented Jackson County in the Oregon Senate from 1961 to 1974. After leaving the Legislature, he served as a director of Associated Oregon Industries; as a director of the Valley of the Rogue Bank; on the Oregon Parks and Recreation Commission; on the State Parks 2010 Citizens Committee; on the Oregon Transportation Commission; and in the Southern Oregon Timber Industries Association. He died in 2012.

This oral history interview with Lynn W. Newbry was conducted by Clark Hansen at Newbry's home in Talent, Oregon, from May 6-7, 1993. In this interview, Newbry discusses his family background and early life in Talent, including life on the family farm and the Depression. He also discusses the political career of his father, Earl T. Newbry. He talks about his education in Talent, as well as attending Oregon State College, and then Pomona College. He also briefly discusses serving in the Air Force during World War II. He discusses his courtship with Charlotte Short and their subsequent marriage in 1943. He discusses his return to Oregon in 1945 and taking over the family orchards and fruit business in 1949 when his father was appointed secretary of state, as well as several community organizations he was involved with. He discusses his involvement with the Republican Party, serving on the Talent school board, and running for the Oregon Senate in 1960. He discusses his legislative career in the Senate from 1961 to 1974, including his committee assignments. He also talks about his fellow legislators, including Harry Boivin, Grace Peck, Ted Hallock, Stafford Hansell, Debbs Potts, Bill Holmstrom, and Jason Boe. He also discusses legislation he worked on, including on land use, labor, taxes, health care, and agriculture. He talks about the administrations of governors Mark Hatfield, Tom McCall, and Neil Goldschmidt; coalitions in the Senate; the procedure of creating legislation; and reapportionment. He closes the interview by discussing SB 100, the land-use planning bill of 1974.