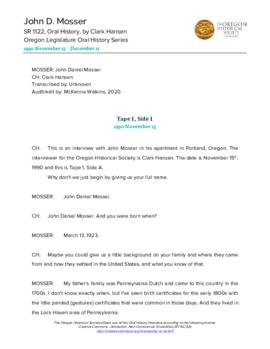 John Daniel Mosser was born in Illinois in 1923 and grew up in the suburbs of Chicago. He attended Princeton, but was called to active duty in the Army in 1943. He fought in the European theater during World War II, primarily in France. He returned to Princeton after the war and graduated in 1947. He met Priscilla Alexander on a blind date, and they married in 1948; they had later four children. After Princeton, Mosser studied law at Yale. Soon after his graduation, the young family moved to Oregon in 1950, and Mosser practiced law in Portland. He was a Republican and represented Washington County in the Oregon House of Representatives in 1957, and again from 1963 to 1966. He led the clean-up of the Willamette River and was involved in the creation of Tom McCall Waterfront Park in Portland, Oregon. He left the Republican Party in 1973 as a result of the Watergate scandal, becoming an Independent instead. He died in 1996.

This oral history interview with John D. Mosser was conducted by Clark Hansen at Mosser's home in Portland, Oregon, from November 15 to December 11, 1990. In this interview, Mosser discusses his family background and early life in the suburbs of Chicago, Illinois. He talks about attending Princeton and working on the school newspaper, as well as his service in the U.S. Army during World War II, which interrupted his education. He details his experience fighting on the front lines in France. He discusses studying law at Yale, his marriage to Priscilla Alexander, and coming to Oregon to practice law, primarily admiralty law, in 1950.

Mosser discusses his involvement with the Republican Party and his legislative service in the Oregon House of Representatives in 1957, including his campaign. He discusses legislation he worked on, particularly on education. He then discusses his activities before he re-entered the Legislature in 1963, including lobbying and raising a family. He goes on to talk about his return to the Oregon House of Representatives from 1963 to 1966. He discusses additional education legislation that he worked on, as well as legislation on taxes, labor, and land use. He speaks at length about the many legislators he worked with, particularly Vera Katz and Vic Atiyeh. He discusses his reasons for leaving the Legislature and his subsequent activities, including serving on the Board of Education and the Land Conservation and Development Commission, continuing his law practice, and leaving the Republican Party. He discusses serving on the Portland Waterfront Commission in the late 1960s, and his involvement in the creation of Tom McCall Waterfront Park. He closes the interview by talking about his family.