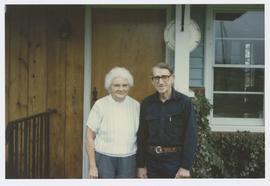 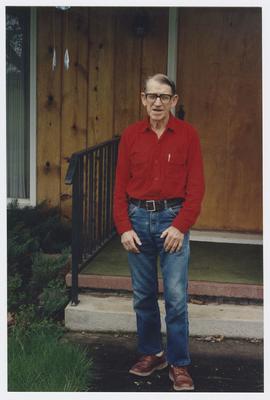 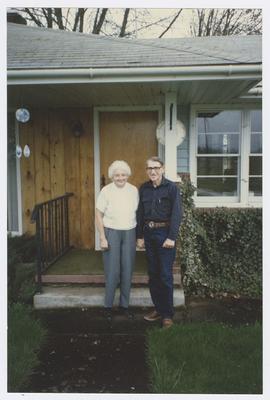 Hector "Huck" Macpherson, Jr. was born in Corvallis, Oregon, in 1918. His family moved to a dairy farm in Oakville, Oregon, when he was around 6 years old. He graduated from Oregon State College (now Oregon State University) with a degree in agricultural technology in 1940. He signed up for the Reserve Officer Training Corps while still in college, and served as an aerial photographer and then a bombing navigator until 1945. He and Katharine "Kitty" Brownell Smith were married in 1943; they later had five children. He was a dairy farmer and a Republican politician. He represented Linn County in the Oregon Senate from 1971 to 1974. He was appointed to the Land Conservation and Development Commission by Governor Neil Goldschmidt, serving from 1990 to 2000. He died in 2015.

This oral history interview with Hector Macpherson, Jr. was conducted by Clark Hansen at Macpherson's farm in Oakville, Oregon, from February 14-25, 1992. MacPherson's wife, Katharine "Kitty" Macpherson, was also present. In this interview, Macpherson discusses his family background and early life on a dairy farm in central Oregon. He speaks at length about his father, Hector Macpherson, Sr., and his activism regarding farm cooperatives and higher education. He then discusses his high school education, particularly his involvement in debate; the history of the land his family's dairy farm is on; and life for farmers during the Depression. He talks about studying science at Oregon State College, training for his military service during World War II, and meeting Kitty. He then discusses running a dairy farm, including water rights and milk pricing. He describes his interest in land-use planning in rural areas. Macpherson also talks about his time in the Oregon Senate from 1971 to 1974, particularly his work on Senate Bill 100, which concerned land-use planning. He also talks about his involvement with the Republican Party, his political campaign against Glenn Huston, and the election of John Burns as Senate president. He speaks about the nature of his constituency, and his thoughts on why rural areas tend to oppose environmental regulation. He then discusses other legislation he worked on, including on field burning, bicycle paths, the Bottle Bill, and additional land use planning. He talks about legislators he worked with, particularly Vic Atiyeh, Jason Boe, Ted Hallock, and Betty Roberts. He closes the interview with a discussion about serving on the Land Conservation and Development Commission, land-use laws in other states, and his impressions of the 1992 Oregon delegation to Congress.