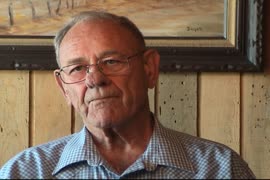 Alfred Theodore Goodwin was born in Bellingham, Washington, in 1923 and grew up in the Pacific Northwest, graduating from high school in the eastern Oregon town of Prineville. Goodwin served in the U.S. Army from 1942 to 1946, and attended the University of Oregon, earning degrees in journalism (1947) and law (1951). Goodwin was appointed to the Oregon Circuit Court for Lane County in 1955, to the Oregon Supreme Court in 1960, to the U.S. District Court in 1969, and to the U.S. Court of Appeals for the Ninth Circuit in 1971. From 1988 to 1991, he served as the Ninth Circuit Court's chief judge. He took senior status in 1991. Judge Goodwin's professional activities have included the Oregon Constitutional Revision Commission, Alpha Tau Omega, the Oregon Bar-Press Broadcasters Committee, where he showed an interest in promoting cooperation between the bar and the media, and the American Bar Association, particularly its committees on relations between bench and bar and on legal education. His support for his alma mater, the University of Oregon, earned him several distinguished service awards. He died in 2022.

This interview with Alfred Goodwin was conducted by Michael O'Rourke at Goodwin's home in Sisters, Oregon, on August 26, 2006. In the interview, Goodwin discusses some of the topics that often come before the U.S. District Court, including immigration, fishing rights, and environmental law. He also discusses national legislation regarding terrorism; proposals to split the Ninth Circuit; technology in the court; and the War on Drugs. He closes the interview by talking about his personal life and family background.