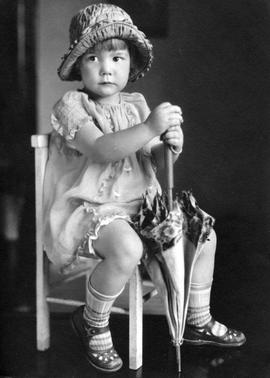 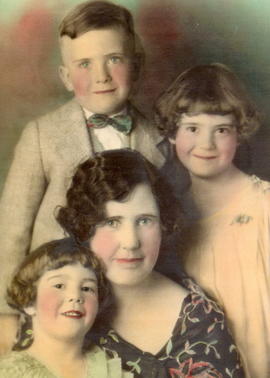 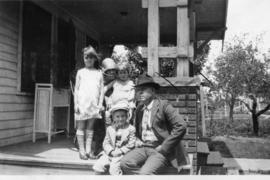 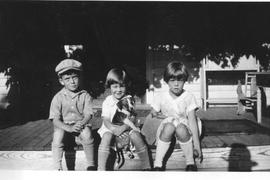 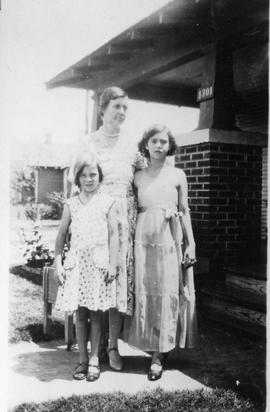 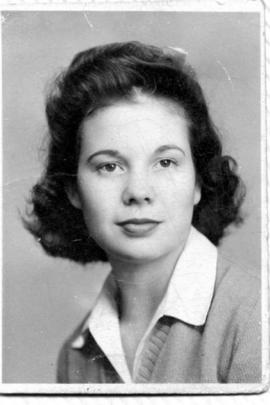 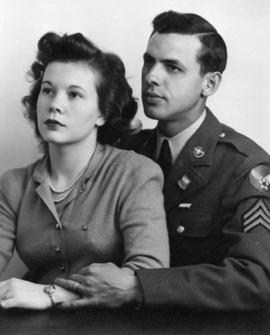 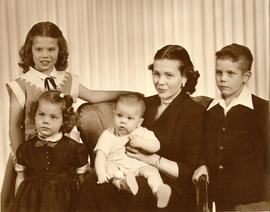 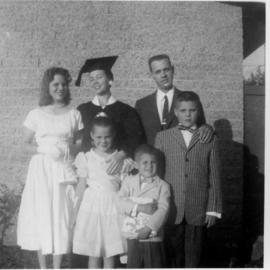 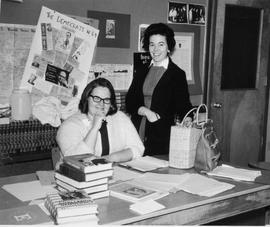 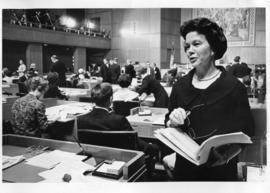 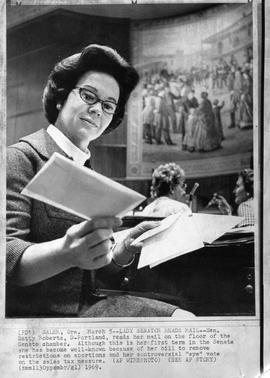 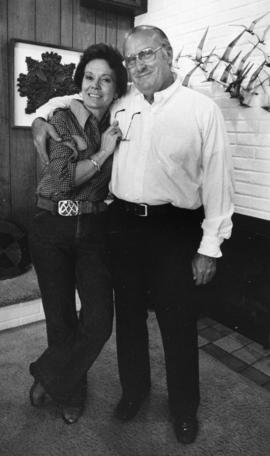 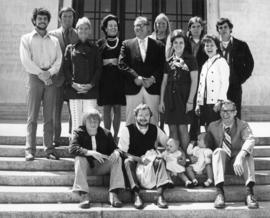 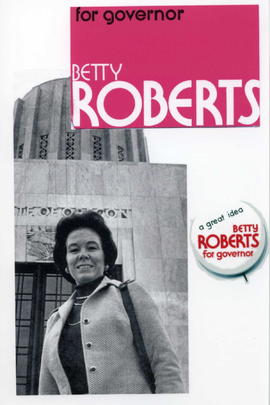 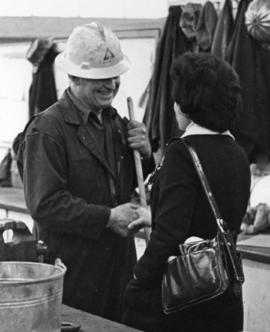 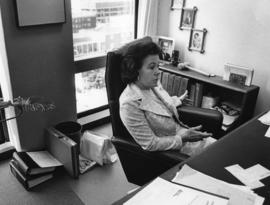 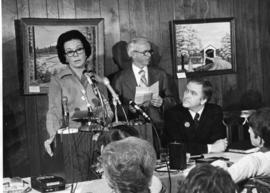 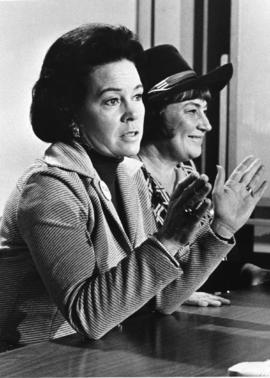 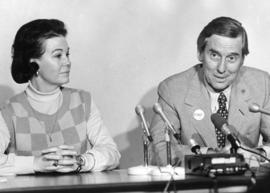 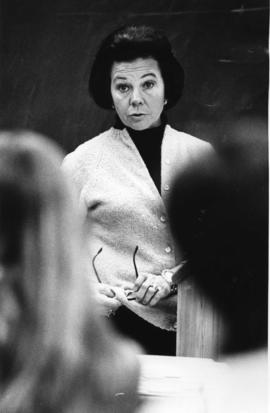 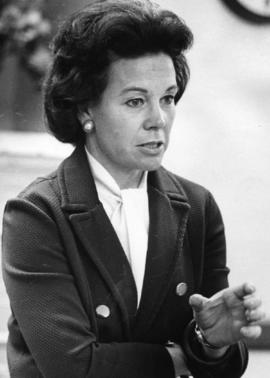 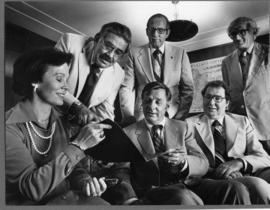 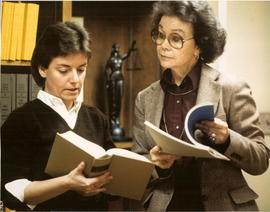 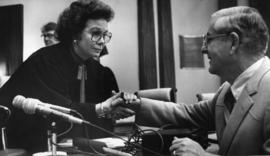 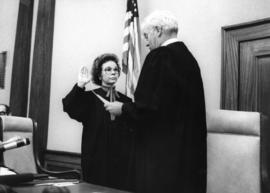 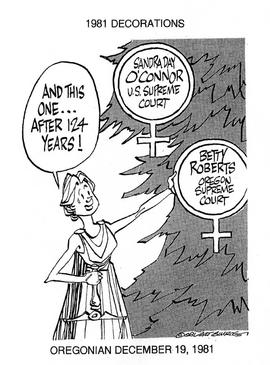 Betty Lucille Roberts, nee Cantrell, was born in Kansas in 1923. She grew up in Wichita Falls, Texas, where her family struggled greatly throughout the Depression. In 1942, she married Bill Rice, a drill instructor in the U.S. Army Air Forces, and after the end of World War II, they settled in Portland, Oregon, where he worked as a banker. Roberts continued her education while raising a family, and she graduated from Portland State College in 1958. Rice objected to her acceptance of a high school teaching position, and they divorced soon after. She soon got involved in local politics and was elected to the school board in the Lynch Elementary School District in East Portland, Oregon. In 1960, she married Oregon politician Frank L. Roberts. In 1961, she earned a Master of Science in political science from the University of Oregon, then took night classes at Northwestern College of Law in Portland. She graduated in 1965 and passed the bar in 1966. She was elected to the Oregon House of Representatives as a Democrat while still in law school. She represented Multnomah County in the Oregon House from 1965 to 1968. She and Frank L. Roberts divorced in 1966, and she married Oregon Representative Keith Skelton in 1968, the same year she won a seat in the Oregon Senate, where she served from 1969 to 1977. She ran unsuccessfully for Oregon governor in 1974, and was appointed by Governor Bob Straub to the Oregon Court of Appeals in 1977. She was appointed to the Oregon Supreme Court in 1982 by Governor Vic Atiyeh, and she retired in 1986. After retiring, she focused her efforts on women's rights. She helped found Oregon Women Lawyers in 1989, and she presided over the state's first legal same-sex marriage ceremony in 2004. She died in 2011.

This oral history interview with Betty Roberts was conducted by Katherine Huff O'Neil at Roberts' home in Portland, Oregon, from October 24 to November 16, 2005, as part of the United States District Court Oral History Project. In addition to the audio recording of the interview, the collection includes a transcript; 50 digital photographs depicting Roberts' childhood, family, and later judicial career and activities; and one photographic print of Roberts. The collection also includes an index to the digital photographs. The interview was conducted in five sessions. The audio for session five was not donated, but its content is available in the transcript.

In the first interview session, conducted on October 24, 2005, Roberts discusses her family background and early life in Texas, including her father's disability and the financial strain her family suffered during the Depression. She also talks about her early education, including playing on a girls football team. She talks about attending Texas Wesleyan College; meeting Bill Rice and their subsequent marriage; and moving to Southern Oregon in 1946. She describes raising a family, and returning to college later in life to pursue a teaching career.

In the second interview session, conducted on November 7, 2005, Roberts briefly speaks further about her experiences during the Depression. She then talks about getting involved in Democratic politics while attending Portland State University; the difficulty of balancing school, work, politics, and family; and her 1960 marriage to Frank Roberts. She also discusses some of the discrimination she faced due to her age and gender. She talks about studying at Northwestern College of Law, including her professors and fellow students. She discusses serving in the Oregon House of Representatives from 1965 to 1968. She talks about her experience as one of the few women in the Legislature, some of the legislation she worked on, and passing the Oregon bar in 1967. She talks about meeting Keith Skelton in the Legislature and their subsequent marriage in 1968. She then talks about serving in the Oregon Senate from 1969 to 1977. She describes the lack of a women's restroom in the Senate and other forms of discrimination she faced. She speaks about legislation on abortion that she worked on.

In the third interview session, conducted on November 10, 2005, Roberts continues to discuss serving in the Oregon House of Representatives. She speaks at length about legislation she worked on, including bills allowing married women to choose their names, and legalizing abortion. She talks about other women legislators and the formation of the women's caucus in 1973, as well as much of the legislation on women's rights they worked on. She also discusses her committee assignments, practicing law in Portland while serving in the Legislature, and the formation of the Oregon Court of Appeals in 1977. She discusses her appointment as a judge to that court.

In the fourth interview session, conducted on November 16, 2005, Roberts discusses serving as a judge on the Oregon Court of Appeals from 1977 to 1982. She discusses her appointment; her fellow judges, particularly Herb Schwab; and the sexism she faced. She then discusses serving as a justice on the Oregon Supreme Court from 1982 to 1986. She talks about her appointment, her fellow justices, and her experience as the first woman on the court. She also talks about some of the cases she heard and precedents set by her opinions. She then talks about her reasons for retiring in 1986, as well as her work as a mediator. Roberts and O'Neil discuss the formation of Oregon Women Lawyers and some of that organization's activities.

In the fifth and final interview session, conducted on February 26, 2007, Roberts revisits several topics from earlier in the interview, including her experiences at Portland State University, her early involvement in Oregon politics, and balancing education, career, and family. She closes the interview by talking about the increase in the number of women in the legal profession. The content of this session is available only in the interview transcript.

Joint copyright for this interview is held by the Oregon Historical Society and the U.S. District Court of Oregon Historical Society. Use is allowed according to the following statement: In Copyright – Educational Use Permitted: http://rightsstatements.org/vocab/InC-EDU/1.0/. Copyright for the photographs has not been determined and permission for use may require seeking additional authorization from copyright holders.