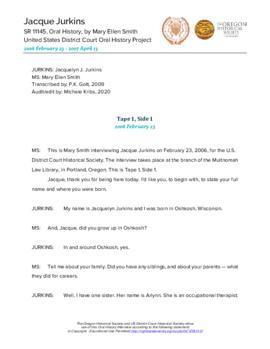 Jacquelyn J. Jurkins was born in Oshkosh, Wisconsin, in 1928. She attended the University of Wisconsin at Oshkosh, and transferred to the University of Wisconsin at Madison to study law. She earned a bachelor of arts degree in 1951, a bachelor of laws degree in 1952 (which was later reissued as a JD), and a master's degree of law in 1954. She then earned a master of law librarianship from the University of Washington in 1960. After earning her degree, she became a librarian at the University of Washington Law Library and helped to establish the Pacific Rim Library. In 1962, she accepted a position at the Colorado Supreme Court Law Library, and in 1964, she came to Portland, Oregon, to head the Multnomah Law Library. She founded the Oregon Council of Libraries in 1975. She also taught at Portland Community College from 1973 to 2005. She has been active with the American Association of Law Libraries since 1970, serving as president from 1984-1985, and was inducted into the association's hall of fame in 2011. The AALL also awarded her the Marian Gould Gallagher Distinguished Service Award in 2019. She retired from the Multnomah Law Library in 2013.

This oral history interview with Jacque Jurkins was conducted by Mary Ellen Smith at the Multnomah Law Library in Portland, Oregon, from February 23, 2006, to April 13, 2007. In this interview, Jurkins discusses her early life and high school experience in Oshkosh, Wisconsin. She then talks about attending the University of Wisconsin at Oshkosh and the discouragement she received from professors when she expressed her desire to become a lawyer. She speaks about studying law at the University of Wisconsin in Madison, including her experience as one of only a few women in the law school, her social life, and some of her professors. She also describes the events that led her to working in the university's law library. She talks about her decision to go to library school and pursue a career as a law librarian. She discusses studying law librarianship at the University of Washington, including her primary professor, Marian Gallagher; her fellow students; and working in the university's library. She then talks about working at the University of Washington law library, helping to establish the Pacific Rim Library, and her experience reorganizing the Colorado Supreme Court Library.

Jurkins discusses coming to Portland, Oregon, in 1964 to head the Multnomah Law Library. She talks about the disarray in which she found the library and her work reorganizing it. She describes providing organizational help for many other law libraries in Oregon. She discusses the expansion of the law library, the different buildings it has occupied, and her staff. She talks about the changes in information technology and how that has affected her library work, as well as the use of the library. She talks about the increased security at the library and courthouses as a result of shootings. She discusses some of the lawyers, judges, and politicians who patronized the library; setting up a library at the Northwestern School of Law at Lewis and Clark College; and her role in the foundation of the Oregon Council of Law Libraries. She discusses teaching classes on legal research at Portland Community College, as well as her involvement with the Multnomah County Bar Association and the American Association of Law Libraries. She closes the interview by talking about her hobbies.

Incomplete transcript (80 pages) is available for in-person use at the Oregon Historical Society Research Library.