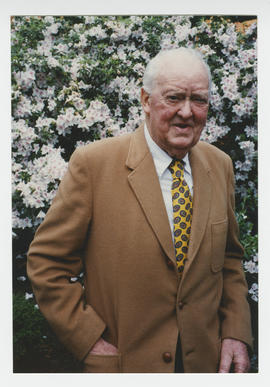 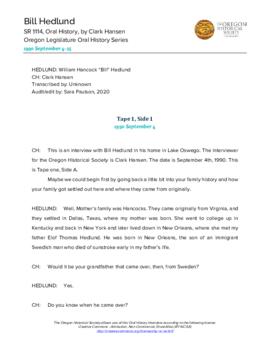 William "Bill" Hancock Hedlund was born in Portland, Oregon, in 1910. He graduated from the University of Oregon in 1931, and from Northwestern College of Law in Portland in 1935. He and Judith Margaret Smith married in 1939. He briefly worked for the Oregon Liquor Control Commission before running for the Oregon Legislature. He served in the Oregon House of Representatives in the 1941-42 session and was an assistant U.S. Attorney from 1942 to 1944. He became a legislative lobbyist and also worked for the Oregon State Legislature. He later returned to serve on the Oregon Liquor Control Commission from 1979 to 1988. He died in 1994.

This oral history interview with Bill Hedlund was conducted by Clark Hansen from September 4-25, 1990. In the interview, Hedlund discusses his family history and early life in Portland, Oregon, including notable people that his family knew, such as Oswald West; his memories of World War I; and his early involvement with the Democratic Party. He then discusses his experience during the Depression, and attending the University of Oregon and the Northwestern College of Law. He talks about his early career as a deputy U.S. marshal and on the Oregon Liquor Control Commission. He also discusses practicing law in Portland, then in the U.S. Attorney's office; the evolution of his political outlook; his father's political career; and his experience in the Coast Guard auxiliary during World War II. Hedlund then discusses his term in the Oregon House of Representatives from 1941 to 1942, including his campaign, his staff and office arrangements, and legislation. He then discusses working in the U.S. Attorney's office from 1943 to 1945, after leaving the Legislature. He also talks about his 33 years as a lobbyist, particularly for oil companies, from 1945 to 1977. He discusses issues the oil lobby was concerned with, including oil spills, gas additives, and environmental legislation. He also talks briefly about the plane accident that killed Secretary of State Robert S. Farrell, Jr., Senate President Marshall E. Cornett, and Governor Earl Snell. He discusses governors of Oregon and their staffs, as well as several legislators. He closes the interview by talking about the lobbying profession in more detail, particularly his work for oil companies, and his service as commissioner of the Oregon Liquor Control Commission from 1980 to 1987.

Audio is incomplete. Tape 5, Side 2 is blank, but its original contents are reflected in a partial transcript (150 pages)