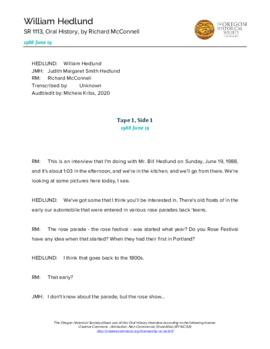 William "Bill" Hancock Hedlund was born in Portland, Oregon, in 1910. He graduated from the University of Oregon in 1931, and from Northwestern College of Law in Portland in 1935. He and Judith Margaret Smith married in 1939. He briefly worked for the Oregon Liquor Control Commission before running for the Oregon Legislature. He served in the Oregon House of Representatives in the 1941-42 session and was an assistant U.S. Attorney from 1942 to 1944. He became a legislative lobbyist and also worked for the Oregon State Legislature. He later returned to serve on the Oregon Liquor Control Commission from 1979 to 1988. He died in 1994.

This oral history interview with Bill Hedlund was conducted by Richard McConnell on June 19, 1988. An unidentified woman was also present. In this interview, Hedlund discusses his experience in the Oregon House of Representatives from 1941 to 1942, and his experiences as a lobbyist. He discusses legislators and lobbyists he worked with, rules regarding lobbying activities, his involvement with the Democratic Party, and governors he served under while in the Legislature. He then looks at photographs and discusses them, his family history, and his early life in Portland. He discusses how he got interested in politics after he graduated from law school in 1935, and his jobs before running for the Legislature in 1940, including working for the Oregon Liquor Control Commission.

Incomplete transcript (29 pages) is available for in-person use at the Oregon Historical Society Research Library.