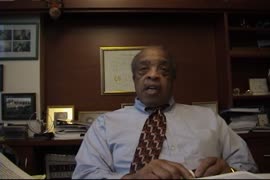 Ancer Lee Haggerty was born in Vanport, Oregon, in 1944. He attended the University of Oregon and graduated in 1966. He enrolled in the Marine Corps Infantry Officer Training program while at the University of Oregon. In 1968, he was called to active duty in Vietnam, where he was wounded by shrapnel to the arm. He was awarded the Silver Star. After his discharge from the military, he attended the University of California Hastings College of the Law. He earned his juris doctorate in 1973 and passed the Oregon bar that same year. He began his legal career in as a law clerk for the Metropolitan Public Defender in Portland, serving until 1977. He then practiced law at the Schwabe, Williamson, and Wyatt law firm. In 1983, he and Judith Ann Blair were married; Blair had one child, and together they later had two more children. Haggerty served as a judge on the Multnomah County District Court from 1989 to 1990, on the Multnomah County Circuit Court from 1990 to 1993, and on the U.S. District Court of Oregon from 1993 to 2014. He served as chief judge of that court from 2002 to 2009.

This oral history interview with Ancer L. Haggerty was conducted by Clark Hansen in Haggerty's chambers at the U.S. District Courthouse in Portland, Oregon, in four sessions from December 9, 2005, to February 23, 2006. Interview sessions in December 2005, part of a session in January 2006, and the session in February 2006 were recorded on audiocassette. The other part of the session in January 2006 was recorded on videocassette.

In the December 2005 and January 2006 sessions recorded on audiocassette, Haggerty discusses his family background and early life in the Woodlawn neighborhood of Portland, including his involvement in high school football. He talks about attending the University of Oregon, his views on the Vietnam War, and joining the Marine Corps. He discusses his military training, being wounded in Vietnam in 1968, and his rehabilitation. He also discusses some of the politics contemporary to the interview session in 2005. He talks about attending the U.C. Hastings College of the Law and taking the Oregon bar exam in 1973.

Haggerty speaks about his legal career, beginning with a brief discussion of his work as a public defender for the Metropolitan Public Defender in Portland from 1973 to 1977. He then talks about working as a lawyer with Schwabe, Williamson, and Wyatt from 1977 to 1989. He discusses his marriage to Judith Ann Blair in 1983, and their children. He talks about serving as a judge on the Multnomah County Circuit Court from 1990 to 1993, including his appointment by Governor Neil Goldschmidt, some of the cases he heard, and his re-election campaign. He then talks about serving as a judge on the U.S. District Court of Oregon from 1993 to the time of the interview in 2006. He talks about his nomination by President Bill Clinton.

In the January 2006 video recording, Haggerty revisits the topic of his family background and early life in the Woodlawn neighborhood of Portland, his interest in playing football, and his service in the Marine Corps during the Vietnam War. He then speaks in more detail about his college experience at U.C. Hastings College of the Law; his work as a public defender in Portland; and practicing law at Schwabe, Williamson, and Wyatt. He also talks about serving as a judge on the Multnomah County Circuit Court and describes his experience as a judge on the Tom Metzger case, as well as other cases he heard. He then discusses serving as a judge on the U.S. District Court of Oregon, including his fellow judges, writing opinions, and serving as chief judge. He closes the video session by discussing his judicial philosophy.

In the final, audio-only interview session in February 2006, Haggerty discusses his early years as a judge on the U.S. District Court of Oregon, his relationship with his fellow District Court judges and other court employees, and the role of the court. He talks about some of the cases he heard, his staff, and serving as chief judge from 2002 until the time of the interview in 2006. He also discusses writing opinions, funding for the courts, and the make-up of the U.S. Supreme Court in 2006. He talks about the public opinion of the U.S. District Court of Oregon, jury trials, and sentencing. He talks about national politics between 2000 and 2006. He closes the interview by reflecting on his career and accomplishments.

Incomplete transcript (135 pages) and typewritten index (4 pages) are available for in-person use at the Oregon Historical Society Research Library. Both the transcript and the index include the content of a related interview with Ancer L. Haggerty, SR 11209, but do not include the video session conducted on January 13, 2006.