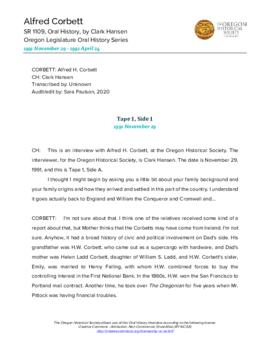 Alfred Hoyt Corbett was born in Portland, Oregon, in 1915. He studied music at the Thatcher School in Ojai, California, and then business at Harvard. He graduated in 1937, and then studied law at Yale, graduating in 1940. He met Nancy Jane deCanizares while at Yale and they married in 1939; they later had five children. He returned to Portland, where he practiced law until serving as an Army sergeant in Italy during World War II, from 1943 to 1945. He continued to practice law in Portland after the war, as well as serving on the Portland Housing Authority from 1949 until 1951, when he was appointed to the Defense Electric Power Administration in Washington, D.C. After a year in federal government, he returned to Oregon to run for the state Legislature. Corbett, a Democrat, represented Multnomah County in the Oregon House of Representatives from 1953 to 1956, and in Senate from 1957 to 1964. He left the Legislature to run for Oregon secretary of state, but was defeated by Tom McCall. He was appointed by President Lyndon Johnson to a senior legal position in the United States Office of Economic Opportunity in Washington, D.C., where he was active in Johnson's War on Poverty. In 1974, he joined the Legal Services Corporation, a federal body that provided legal services to low-income people. He retired in 1978. Corbett died in 2000.

This oral history interview with Alfred H. Corbett was conducted by Clark Hansen at the Oregon Historical Society in Portland, Oregon, from November 29, 1991, to April 24, 1992. In this interview, Corbett discusses his family background and early life in the Dunthorpe neighborhood of Portland and in eastern Oregon. He also discusses the political career of his father, Henry Ladd Corbett, and life during the Depression. He then talks about his education, including studying business at Harvard and law at Yale. He discusses meeting his wife, Nancy deCanizares, and her family background and early life. He briefly discusses his service in the U.S. Army during World War II, where he fought in Italy from 1943 to 1945. Corbett talks about practicing law in Portland and about some of his clients, including the Southern Pacific Railroad. He also talks about his brief service on the Portland Housing Authority at the time of the Vanport Flood; his year in the Defense Electric Power Administration; his involvement with the Democratic Party; and returning to Oregon to run for the state Legislature.

Corbett then discusses working on the 1956 presidential campaign of Adlai Stevenson and his own 1964 campaign for Oregon secretary of state. He discusses his work in the federal Office of Economic Opportunity in Washington, D.C., from 1965 to 1972, and then in the Legal Services Corporation until his retirement in 1978. He talks about some of the programs he was affiliated with in those positions, including educational, legal aid, and health care programs. Additionally, he discusses his dealings with U.S. Senator Wayne Morse and U.S. Rep. Edith Green. He also talks about clashing with the Nixon administration. He closes the interview by talking about his activities in retirement and his family life.