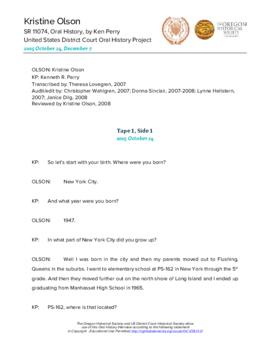 Kristine Olson was born in New York City in 1947. She grew up in Queens, New York, and her family moved to Manhasset when she was 13 years old. As a teenager, she was active in the civil rights movement, participating in several marches. She graduated from Wellesley College in 1969, and from Yale Law School in 1972. While at Yale, she lived in the Cosey Beach Commune until her marriage with Jeff Rogers in 1971. They later had two children. She was a law clerk for U.S. District Court Judge Robert Zampano in Connecticut for a year. Then, in 1973, she and Rogers moved to Oregon, where she clerked for U.S. District Court Judge James Burns until 1974. From 1974 to 1984, she was an assistant U.S. attorney under Sid Lezak. She then taught law at Lewis and Clark College until 1994, when she was appointed U.S. Attorney for the District of Oregon. That same year, she and Jeff Rogers divorced. Sid Lezak introduced her to Les Swanson, and she and Swanson married in 1996. In 2001, early in the George W. Bush administration, she resigned from her position as a U.S. attorney. She then served as legal counsel for Oregon Congressman Earl Blumenauer until her retirement in 2003. In her retirement, she was active in numerous civic organizations, including the American Civil Liberties Union, the Trust for Public Land, and the Scandinavian Heritage Foundation. She also authored a biography, entitled "Standing Tall," of Grand Ronde Tribal Council member Kathryn Jones Harrison.

This oral history interview with Kristine Olson was conducted by Kenneth R. Perry from October 24 to December 7, 2005. In this interview, Olson discusses her family background and early life in Queens, New York, including her early education, her childhood pets, and her experience moving to a more affluent neighborhood at age 13. She also talks about her experience growing up in a neighborhood that was equal parts Jewish and Catholic. She discusses her early involvement in Democratic politics, particularly her activities during the civil rights movement. Olson talks about her experience at Wellesley College in Boston, Massachusetts, including her involvement in several student political organizations, such as the Students for a Democratic Society, Wellesley Against Racism, and ETHOS. She also discusses her social life and acquaintanceship with Hillary Rodham Clinton. She briefly talks about attending Yale Law School. Olson then discusses living in the Cosey Beach Commune in the 1970s, meeting Jeff Rogers and their subsequent marriage, and beginning her law career as a clerk for U.S. District Court Judge Robert Zampano. She describes moving to Oregon in 1973 and clerking for U.S. District Court Judge James Burns.

Olson discusses working as an assistant U.S. attorney with Sid Lezak from 1974 to 1984. She talks about taking time off to have children and the flexibility the U.S. attorney's office afforded her. She describes her poor relationship with Lezak's successor, Charlie Turner, and how his reaction to her handling of the prosecution of Black Panther Kent Ford resulted in her departure from the U.S. attorney's office. She then describes her appointment as U.S. Attorney for the District of Oregon in 1994, including opposition from Charlie Turner, her interview with Attorney General Janet Reno, and her confirmation hearing. She describes the differences between how she and Turner ran the U.S. attorney's office, particularly Turner's emphasis on drug and pornography laws as opposed to her emphasis on civil rights and environmental laws. She talks about her admiration for Sid Lezak and Janet Reno, her brief experience working with Attorney General John Ashcroft, and her reasons for leaving office in 2001. She discusses working as legal counsel for Oregon Congressman Earl Blumenauer from 2001 to 2003.

Olson talks about her retirement activities, including her involvement with numerous civic organizations. She also talks about her friendship with Grand Ronde Tribal Council member Kathryn Harrison and about writing Harrison's biography, "Standing Tall." She also discusses her second marriage to Les Swanson. Olson closes the interview by describing some of her most influential professors, including Tom Emerson at Yale and Ingrid Staller at Wellesley.