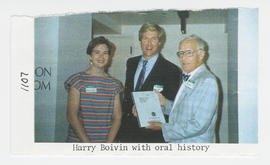 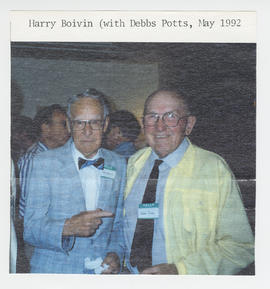 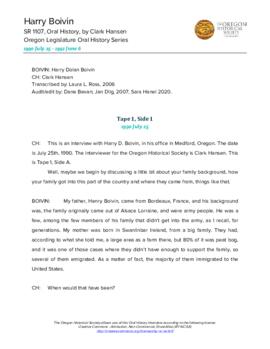 Harry Dolan Boivin was born in Ashland, Oregon, in 1904. In 1906, his family moved to Klamath Falls, Oregon, where he lived for much of the rest of his life. He attended Santa Clara University in Santa Clara, California, where he earned both a bachelor's degree and a law degree. In 1923, he began practicing law in Klamath Falls, first with Claude McColloch, then by himself. In 1934, he and Vivian Irene McCauley were married; they had one child. Boivin, a conservative Democrat, represented Klamath County in Oregon House of Representatives from 1935 to 1942, serving as speaker for the 1937 session. At the time, he was the youngest speaker in Oregon history. He served in the Oregon Senate from 1955 to 1972, including two terms as president of the Senate from 1961 to 1966. After leaving the Legislature, he returned to his law practice in Klamath Falls. After Vivian died in 1985, he married Ruth S. Padgett the next year. He died in 1999.

This oral history interview with Harry Boivin was conducted by Clark Hansen in Boivin's office in Medford, Oregon, from July 25, 1991, to June 6, 1992. In this interview, Boivin discusses his family history and early life in Klamath Falls, Oregon, as well as his education at Santa Clara University in California. He then discusses getting started in his law career, including working for the district attorney in Dorris, California, and then working with Claude McColloch in Klamath Falls.

Boivin then talks about serving in the Oregon House of Representatives from 1935 to 1942, including serving as speaker of the House in 1937. He discusses partisan politics and coalition building; the old Capitol building and conditions after it burned down in 1937; his support of the New Deal; and his time as speaker. He discusses some of the legislators he worked with in the House, including Grace Peck. He also talks briefly about his activities after leaving the House, including trying to enlist during World War II, as well as serving on the Oregon Liquor Control Commission and the Board of Education.

Boivin goes on to discuss serving in the Oregon Senate from 1955 to 1972, including as Senate president from 1961 to 1966. Some of the issues he discusses include reapportionment, logging and forestry, taxation, and agriculture. He also talks about campaigning, committee assignments, and the duties of the Senate president. Boivin talks often about the Oregon Institute of Technology and his role in its formation. He also discusses his working relationship with the many governors that served during his political career. He discusses his fellow senators, including Monte Montgomery, Al Ullman, Wayne Morse, and Debbs Potts.

He closes the interview by discussing the changes in the Democratic and Republican parties, and politics in general, over the second half of the 20th century.

Incomplete transcript (371 pages) and 1 black and white photograph are available for in-person use at the Oregon Historical Society Research Library.