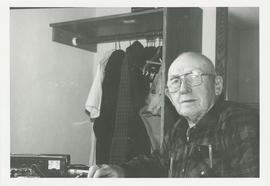 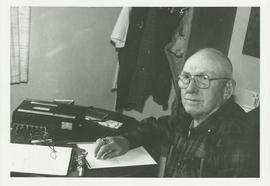 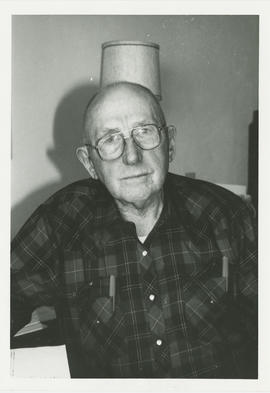 Eugene Debbs Potts was born in Buzzard Roost, California, and was named after the political activist Eugene V. Debs. Many documents record Potts' date of birth as 1909 or 1910, but Potts asserts he was born in 1908 because that's what was written in his family Bible. His family came to Oregon soon after he was born, and he grew up in Eastern Oregon. He began working in a sawmill at age 12. He served in the Navy during World War II, remaining in the Navy Reserves for nearly 20 years afterward. He later owned sawmills in Grants Pass and the Klamath Falls area, and also founded the town of Pottsville, Oregon. He was a Democratic politician and was elected mayor of Grants Pass in 1958. He then represented Josephine County in the Oregon Senate from 1961 to 1972. After redistricting, he represented Josephine and Jackson counties from 1973 to 1984. He also served as Senate president from 1967 to 1970, during which time he temporarily acted as governor when Governor Tom McCall was out of state, totaling 196 days. After he left the Senate, Potts was appointed by Governor Vic Atiyeh to chair the Oregon Lottery Commission, a position he held from 1985 to 2003. He was married twice. He died in 2003, shortly after retiring from the lottery commission.

This oral history interview with Debbs Potts was conducted by James Strassmaier in a Super 8 Motel in Grants Pass, Oregon, and at an ExecuLodge in Salem, Oregon, from April 15, 1991, to May 28, 1991. In the interview, Potts discusses his family background and early life in Eastern Oregon, including his family's religious life, his education in one-room schools, and working various jobs as a young teenager. He also talks about the sawmill business, including owning and operating various sawmills. He then discusses his marriage to Bobbye Irene Michael, including their attempts to adopt children. Potts talks about his service in the U.S. Navy during World War II, including his training and life on a ship. He also discusses his time as mayor of Grants Pass from 1958 to 1960.

Potts then discusses serving in the state Senate from 1961 to 1984. He talks about his involvement with the Democratic Party; several prominent Democrats, including Harry Boivin and Jason Boe; and his early committee assignments, particularly the Ways and Means Committee. He discusses his campaigns, legislative procedure, and interpersonal politics. He also talks about legislation that came up during his tenure, including on taxes, reapportionment, and education. He discusses working with other legislators, including Monte Montgomery, Ben Musa, Lynn Newbry, and Ed Fadeley. Potts talks about serving as president of the Senate from 1967 to 1970, including the process of getting elected to that position, having Cecil Edwards as his secretary, and the duties of the president. He also discusses working with different governors' administrations, the Senate presidency of Jason Boe, and partisan politics. Potts talks briefly about his faith and his adopted children. He closes the interview with a discussion on his activities after serving in the Legislature, including running the Oregon Lottery.