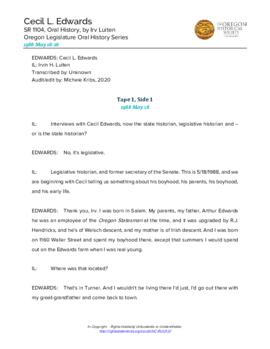 This oral history interview with Cecil Edwards was conducted by Irvin Luiten from May 18 to 26, 1988. In the interview, Edwards discusses his family history and early life in Salem, Oregon, including his education and early interest in government. He then talks about his experiences working for the Oregon Legislature beginning in 1933. He discusses the old Capitol building, which burned down in 1935; campaigns he worked on, and the role of lobbyists. He also talks about working as secretary for Governor Charles Sprague. Edwards then describes his service in the National Guard during World War II, particularly working with horses and dogs. He talks about returning to work in Oregon government after the war ended, including serving on the Racing Commission; being fired by Governor Mark Hatfield; lobbying for the Oregon Cattlemen's Association; and returning to the Legislature to work as a secretary. He discusses the numerous committees he was secretary for, including the agriculture committee, fish and game committee, and land-use board. Edwards next discusses his tenure as secretary of the Senate from 1965 to 1975, focusing on many of the legislators he worked with, including Clarence Barton, Debbs Potts, and Jason Boe. He also speaks at length about redistricting, as well as the duties of the secretary of the Senate and Senate rules.

Incomplete transcript (101 pages) is available for in-person use at the Oregon Historical Society Research Library.