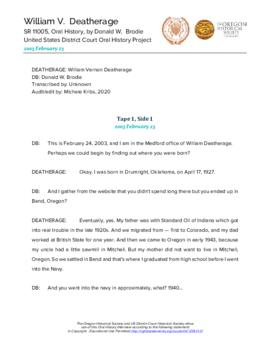 William "Bill" Vernon Deatherage was born in Drumright, Oklahoma, in 1927. His family moved to Bend, Oregon, in 1943. In 1945, he enlisted in the U.S. Navy, serving for three years. After his discharge, he attended the University of Oregon, earning a bachelor of science degree in 1952 and a law degree in 1954. While at the University of Oregon, he met Priscilla Ann Campbell. They married in 1954 and later had two children. He practiced law in Medford, Oregon, with Otto Frohnmayer. Their law firm came to be known as Frohnmayer, Deatherage, Jamieson, Moore, Armosino and McGovern. Deatherage died in 2018.

This oral history interview with William V. Deatherage was conducted by Donald W. Brodie in Deatherage's office in Medford, Oregon, on February 24, 2003. In this interview, Deatherage discusses his service in the U.S. Navy from 1945 to 1948, particularly regarding the USS New Jersey. He then talks about his law professors at the University of Oregon. He discusses deciding to practice law with Otto Frohnmayer in Medford and gives a brief history of the law firm that was later known as Frohnmayer, Deatherage, Jamieson, Moore, Armosino and McGovern. He discusses some of the cases he tried over his career, including a first-degree murder case; judges he argued before; and his campaign for the Medford School Board. He also talks about his involvement in the Oregon State Bar and other legal organizations. He discusses the changes in the legal profession over the 20th century, including the increase in arbitration in lieu of trial. He also talks about government funding problems at the time of the interview and their effect on Medford. Deatherage and Brodie reminisce about the law school at the University of Oregon. Deatherage closes the interview by discussing his love of golf and gardening.

Incomplete transcript (43 pages) is available for in-person use at the Oregon Historical Society Research Library.