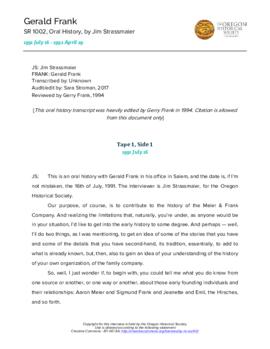 Gerald "Gerry" Wendell Frank was born in Portland, Oregon, in 1923. He attended Stanford University, where he enrolled in the Reserve Officer Training Program. He was called to active duty in the U.S. Army in 1943, and served in the European theater during World War II. During his Army training in California, he studied engineering at Loyola University. After his discharge in 1945, he remained in England and attended Cambridge University, where he earned a bachelor's degree in economics and a master's degree in politics. After graduating, he returned to Portland and worked at the family business, the Meier & Frank department store. He opened and managed the Meier & Frank store in Salem, Oregon in 1955. After the sale of Meier & Frank in 1965, Frank became involved with Mark Hatfield's political career, eventually becoming the senator's chief of staff. In 1981, he opened a dessert shop in Salem called Gerry Frank's Konditorei. He was a longtime contributor to the Oregonian newspaper and also authored a guidebook entitled "Gerry Frank's Oregon."

This oral history interview with Gerry Frank was conducted by Jim Strassmaier in Frank's office in Salem, Oregon, from July 16, 1991, to April 29, 1992. The interview was conducted in four sessions.

In the first interview session, conducted on July 16, 1991, Frank discusses his family background and how it intertwines with the history of the Meier & Frank Company. He talks about the company's founding in 1857 by his great-grandfather, Aaron Meier, and the growth of the store during the 19th century, including the store's Friday Surprise marketing strategy and the buildings the store inhabited. He then talks about the history of Meier & Frank during the early 20th century, including his uncle Julius Meier's term as Oregon governor from 1931 to 1935, competition with other department stores in Portland, and Meier & Frank's newspaper advertisements. He also talks about the life of his father, Aaron Meier Frank.

In the second interview session, conducted on November 6, 1991, Frank continues discussing the life of his father, Aaron Meier Frank, including his management of the Meier & Frank Department Store beginning in 1937. He also continues discussing Meier & Frank's newspaper advertisements. He talks about the use of credit lines in the department store, particularly during the Depression. He discusses the Meier & Frank board of directors, and begins talking about the expansion of the store into Salem.

In the third interview session, conducted on December 21, 1991, Frank continues discussing the expansion of the Meier & Frank Department Store into Salem. He talks about managing the Salem branch from 1955 to 1965, including tailoring merchandise to the Salem community, his involvement in Salem community organizations, and his relationship with his employees. He also talks about the store's seasonal events and his relationship with other Meier & Frank store managers.

In the fourth and final interview session, conducted on April 29, 1992, Frank discusses the conditions that led to the sale of the Meier & Frank Department Store to the May Company in 1965. He describes the family divisions surrounding the sale. He then talks about resigning as manager of the Salem branch and the effect of the sale on the store's personnel and customer base. He closes the interview by talking about his relationship with the management of the Meier & Frank Department Store at the time of the interview in 1992.